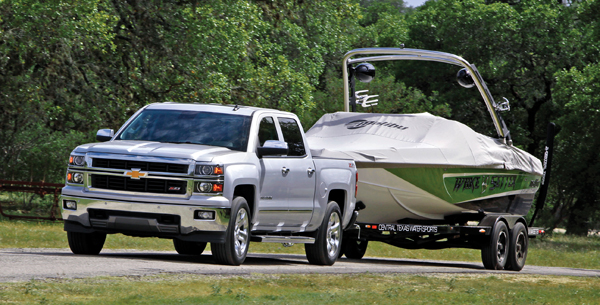 The long awaited half-ton do-all from Chevrolet made its American press debut at a much ballyhooed event late last year. Now, just a few months later, the 2014 Silverado is making its public debut in showrooms up and down the Texas Coast and to the cheers of excited anglers everywhere.

“Excited,” you say, “over a truck?” Yes and here’s why: The 2014 model is all-new from the ground up. Chevrolet says it’s the best pick-up on the planet. Ford and Ram may have an issue with that claim, but it certainly is worth debating.

At first glance, the exterior of the new Chevy looks almost identical to the outgoing model, but placed side-by-side you’ll notice sweeping changes or, shall we say, evolutionary design advancements. In other words, take the 2013, emphasize the squared wheel openings, fender flares, bulging hood and twin-port grille, then crank up the volume. It’s bigger, badder and more in-your-face than ever before. Rear doors on crew cabs are larger too and double cab models are now hinged at the front.

The last generation’s interior was outdated and more in need of a makeover than a 50-year old news anchor. It appears Chevrolet felt the same way. The new dash is more upright and includes a revised center stack. Controls are functional, logically placed and easy to operate, even with work gloves on.

The new Chevrolet My Link provides easy-to-use connectivity for the job site or fishing expeditions, with natural voice recognition and enough ports and power outlets to support multiple devices.

No fewer than 7 different Silverado 1500 models are available including the all-new High Country later this fall.

Now here’s another shocker: base prices for the regular cab, double cab and crew cab carry over from the 2013 model.

Of course, we’ve only highlighted some of most prominent new features of the 2014 Chevrolet Silverado. More details can be found by putting on your waders and heading to www.Chevrolet.com.