All About Big Blue 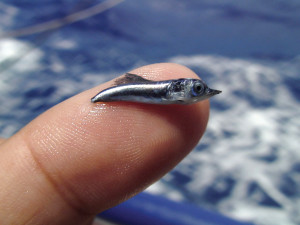 This tiny blue marlin larva won’t reach maturity until it is around four years of age. Photo: Dr. Jay Rooker

The blue marlin is one of the most iconic catches in sports fishing and with a length of 16 feet, and record weight of nearly one ton, it’s for good reason.

Blue marlin territory in the Atlantic reaches as far north as Maine and as far south as the tip of Africa. There are also Pacific blue marlin, debated to be a separate species, that will sometimes migrate and breed with their Atlantic relatives.

Spawning occurs in late summer during the warmest months, but nearer the equator with constant high temperatures, spawning can last much longer.

During this period the female lays millions of eggs for males to fertilize. Those eggs that don’t get eaten will float with the current until they hatch.

Upon hatching, marlin larvae eat anything they can fit in their mouths, including each other. A few weeks later when they’ve grown a few inches the marlins become more active hunters. Unfortunately, little is known about the period of time when marlins mature about four years later. These younger marlins slip through nets and quickly dart away from boats and researchers. 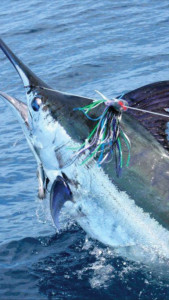 Once they have matured, the females can be up to four times larger than the males with lengths up to 16 feet and a record weight of almost one ton. To sustain this size, marlins have been known to eat nearly anything with local reports of fisherman catching them eating plastic sandals, though a favorite food of theirs is squid. Marlin will dive down to 2,000 feet and skewer the squid on their bill, sometimes slicing them in half. Their size and natural body heat allow them to dive farther and longer than many other species, with the females going even deeper due to their larger size. Marlin also commonly eat mackerel, tuna and can take down white marlin as well.

Marlins have been around a long time with fossils found in Baja California dated to just over three million years ago showing little change since then. These records also support that blue marlin are more closely related to sailfish, as opposed to the similarly named black marlin, who are closer relatives to swordfish.

Despite this long legacy blue marlin are currently a threatened species. Though many nations and sport fishing competitions and organizations have adapted to these numbers and work to make sure marlin populations stay healthy and off the endangered species list.

Any females that aren’t caught almost always outlive the males. Males live until about 18 while females live until 27 with reports of a few females reaching 40.