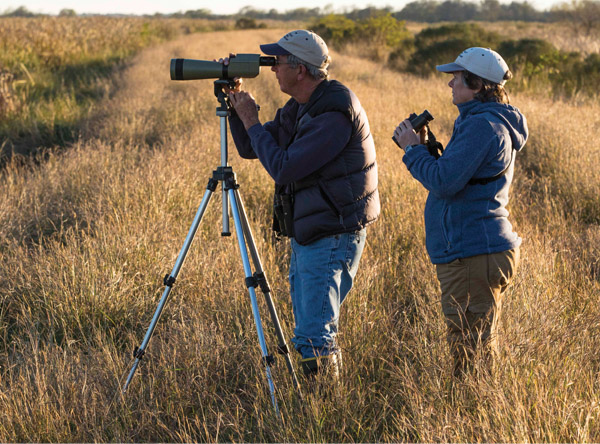 It takes teamwork to spot, identify and count the flurry of quick bird activity at San Bernard NWR. San Bernard’s CBC is the third of four CBCs that Tad Finnell and Susan Heath will participate in this year. Photo by Jim Olive Photography.

Each Christmas, thousands of volunteers take to the field to count birds in the great, international census supported by Audubon.  This December, Janice Van Dyke Walden joined a group at San Bernard National Wildlife Refuge, and tells how anyone can join in the count.

It’s 6:30 a.m. on Friday, December 18, 2015 at the headquarters of San Bernard National Wildlife Refuge in Texas when about 35 volunteers show up in the dark, ready to go in the field to count birds.  They don’t stay long; they are here to catch the first light.  That’s when the refuge’s bird life is most active.  As soon as Ron Weeks marks their presence on his laptop’s list, they form groups and disappear in the dark to their designated sections within the 15-mile count radius.

Outside, U.S. Fish and Wildlife Biologist Jennifer Wilson is fielding questions.  She and Ron are co-compilers for the event, and she’s well acquainted with the procedure, having managed many Audubon Christmas Bird Counts at the refuge.

Suddenly, headquarters’ big room empties, and Ron sees me standing near him to receive my group assignment.  “You go with Susan Heath to Wolfweed Wetlands,” he says, barely looking up from his laptop.

I get in my car, and head to the refuge’s wetland.  Already the sun is coming up.  The visibility is clear, the atmosphere is relatively dry, and it’s 38° degrees F.  I’m wearing three layers, tall boots and fingerless gloves.  When I arrive at the wetland, Susan sees me and says, “Aren’t you going to be cold?”  Having been in situations like this before, I shrug off her concern, and join the four in our group: Sandy Moore, Joanna Friesen, Tad Finnell and Susan who is Avian Conservationist Biologist for the Gulf Coast Bird Observatory.

Everyone in this group has put in long hours so far: Sandy woke up at 3:30 this morning to pick up Joanna for the hour-and-a-half drive from Houston; Tad and Susan woke up yesterday at 3 a.m., did the Guadalupe River Delta bird count, got home at 9 p.m. last night, and woke up early this morning to be at San Bernard before dawn.  This is their third bird count in a week, and in 48 hours they’ll do a fourth one in Freeport. 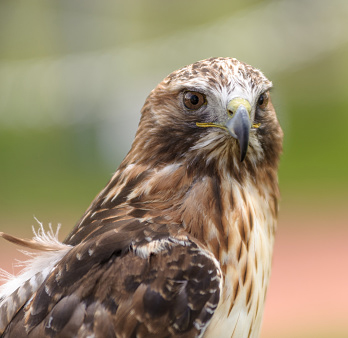 If there seems to be a rush among the friendly morning chatter, there is:  it’s a rush against daylight; a rush to count as many birds in the country in the season’s three-week window.  Researchers and climate specialists rely on data from the annual Christmas Bird Count to understand species decline, habitat changes and migratory trends influenced by a warming world.  When Ornithologist Frank M. Chapman proposed the first Christmas Bird Count in December 1900, he promoted it as an alternative to the “Side Hunts” so prevalent at the time, where teaming hunters would choose sides and see how many birds they could shoot in a day.  That first year, 27 volunteer observers conducted a bird census at 29 locations, from Ontario to California.  A century and 15 years since, the census has grown to a major Holiday tradition with 71,531 observers in 2,369 locations (2012-2013).  Between December 14th and January 5th, thousands of volunteers in all 50 states, Canada and the countries and territories south of Texas take to the field to count.  In Texas, alone, 2,700 volunteers participate in the count at 108 locations, 29 of which are in the high-season migration zone of the Lower Rio Grande Valley and the Texas Gulf Coast.  Success is based on location, access to land, the number of consistent volunteers and the organization behind the event.  Given that, today’s count at San Bernard will again rank in the top five in the nation. 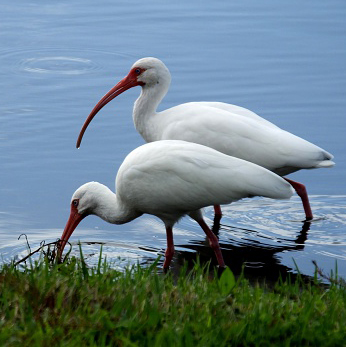 This morning, Sandy, Joanna and Susan are smiling at the optimum conditions: this day last year at Wolfweed Wetlands they faced over four inches of unending rain, low bird counts, and more mosquitoes than you could take to hell.  This morning, it’s cool and clear, and the wetland has a good level of water for wading birds, waterfowl, ducks, raptors, kingfishers and flycatchers.  The woods next to the wetland are alive with song from sparrows, thrushes and wrens.  And, within feet of the parking lot, there’s a sudden frenzy of sightings: an American Bald Eagle swoops down, catches a Coot and flies away, a Cooper’s Hawk lands momentarily in a tree near us, three Anhinga perch in wetland scrub nearby, and seven Sandhill Cranes fly overhead, sounding their sure arrival.  Everyone whips out their binoculars to look in different directions as if manning a foxhole.  Tad puts his Kowa TSN-2 spotting scope in place on tripod, and aims deep in the wetland for a raft of Coot.  He counts 50 plus two Plied-Billed Grebes.  Then, in less than two minutes, he counts another 180 Coot.  It’s 7:30 a.m., and the group is fixated high on the wetland’s observation deck.  Nineteen White Ibis pass by, pairs and pairs of Cormorants fly in front of us, a flock of Snow Geese fly overhead, and a Red Tailed Hawk can be heard in the woods.

When the flurry of activity subsides, Tad picks up his sticks, and we walk down the dike, stopping to count as more birds come in to view. 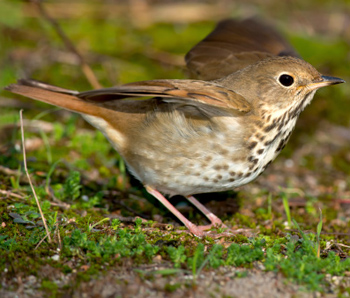 We then dip into the woods off the dike, down a tall grass trail that takes us to Cocklebur Slough.  There, Susan places an owl box in a Hackberry tree.  Within minutes, the owl’s recorded hoot draws birds out of the brush.  They begin to congregate on the Hackberry.  It’s a simple and effective technique used to draw out small birds when the brush is impassable for observers.  Gathering around the box and near the slough are Lincoln’s Sparrow, Swamp Sparrow, Carolina Wren, Yellow-rumped Warbler, House Wren and Hermit Thrush.  Again, it takes four pairs of eyes in various directions to count the quick activity.

By 8:40 a.m., we’ve only covered one side of the wetland and counted 27 species, over one-third of the 63 species our group will count that day.

With the field counts complete by mid-afternoon, all the groups reconvene at headquarters to report their numbers to Ron and compare notes while enjoying fabulous gumbo provided by Friends of Brazoria Wildlife Refuge.

If you’d like to participate in next year’s bird count, the cost is free.  Visit www.audubon.org/conservation/join-christmas-bird-count