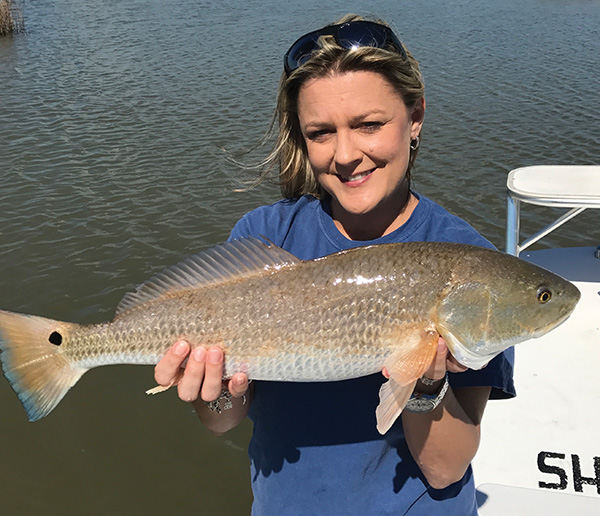 After what feels like an eternal summer this year, I could not be more excited thinking about fall and cooler temperatures. There are so many great things that happen on the bays, and of course the cooler temperatures don’t hurt my feelings one bit.

In mid August its still hot but one of the first major changes happens; the kids go back to school. There’s a slight drop in fishing pressure as many of us have to change our focus from entertaining kids to keeping them on track with school work and other related activities.

Tropical weather from late summer is usually the starting point of some very slight bay water cooling. The increase in even daily thunderstorms and cloud cover starts the downward trend of water temperatures. This seems to in turn trigger some slight change in fish feeding and activity periods.

Extreme daytime temps of summer can reach well into the 90’s and often leave us with fish that are sluggish and less active during the mid day periods. Scorching heat and cloudless days can push fish to slightly deeper water and definitely seem to keep fish from high levels of surface feeding. Not to say that there won’t be activity in the heat but many days it can be reduced from other peak times. Add in some heavy cloud cover and you will notice a decrease in water temp even without rain fall. Mix in some solid rainstorms with the cloud cover and its entirely possible to knock several degrees off the surface and shallow water temps.

By September, we have typically passed peak temperatures. It’s still hot for sure, but we are beginning to trend slowly downward. Shorter daylight “photo period” helps as there is a reduction of hours of sun heating. Another slight boost to fishing is the second annual reduction of fishing and boating traffic due the opening of some shooting sports season. Teal season does put some boats on the water in select areas, but they aren’t moving around much during the first few hours of the day. In general, the reduction of boats running around tends to help “settle” the fish and allow them to spend their time doing the feeding and moving habits that are normal and less of their time trying to avoid propellers and loud noises that our boats make.

One of the biggest changes, and one that affects certain parts of the bay very dramatically, is the change in tides and timing. This is a known annual event, though there is no exact repeating date when it occurs. At some time in September, we will see this change, the change of having a typical daily incoming tide in the early morning hours. Eventually we see the early morning tide turn to an outgoing swing. It doesn’t sound like a big deal, but if you understand the number, size and varying types of baitfish, shrimp and crabs that have grown through the warmer months and have spent their time deep into marshes and up rivers and creeks, falling tides tend to become the predominant feeding time.

Knowing where some of the big numbers of prey species are makes it easier to understand how an outgoing tide can spike feeding activity. Small baitfish and invertebrates are much more subject to being moved around by the force of tides, not to mention that their food sources are moved and easily available during periods of stronger tide movement. As these tides flow and bring food out into open areas, fish tend to binge feed on more available food sources.

Conversely, on incoming and higher tides, many of the food species are able to find cover and shelter in places that make it challenging for predators to reach them.

The final change of the fall tends to come slightly later in September or early October, and is again temperature related. Though we will probably see some very mild cool fronts, the early “stout” fronts will make a huge difference in fishing. The smaller mild fronts will create small changes in bay temps and fish feeding, but as we start to see more significant fronts, feeding activity increases at a much more notable rate. Since these early fronts don’t typically bring huge temperature drops and are quickly followed by rapid warming, they don’t really cool the water that much. Stronger fronts that last longer, will create even more water cooling.

So, why does cooler water make the fish feed? In short, so many of the small prey species that arrive in the spring, have grown to maturity and are prepared to move out of the back bays, creeks and rivers and these movements are triggered by falling temperatures. Add the onset of outgoing tides and you have a perfect recipe for heavy feeding.

Fish are aggressive, food is more readily available, the boating and fishing traffic has reduced and the comfort level is significantly better to spend a day outside. Sounds like a perfect time to go and enjoy the outdoors.