Family, Fun and Friendships: One Hundred Years of Commitment to the Sea 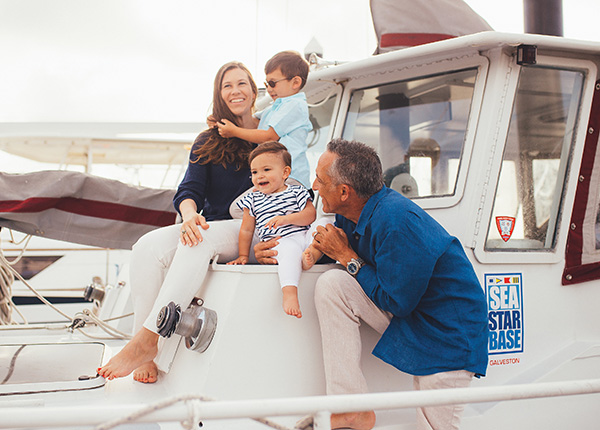 Owner of the Yacht Sales Company, Jonathon Davis with his wife Kim, son Cole and daughter Camille at the Sea Star Base Galveston. Photography by Ashley Henry with Hey Pretty Baby Photography.

Throughout history sailing has been instrumental in the development of civilization, affording humanity greater mobility than travel over land, whether for trade transport or warfare, and the capacity for fishing. Sailing for pleasure can involve short trips across a bay, day sailing, coastal cruising, and more extended offshore or ‘blue-water’ cruising. These trips can be singlehanded or the vessel may be crewed by families or groups of friends.

Jonathon Davis, owner and founder of The Yacht Sales Company located in Kemah, has a family with this type of lifestyle. Jonathon and his lovely wife, Kim, have more than 150,000 sea miles between the two of them. Jonathon actually proposed to Kim on a dive on one of their trips at sea. Jonathon feels that family always comes first and has his 4 year old son, Cole, and new baby girl, Camille, go sailing as much as possible. Fun is always a factor with this family.

When Jonathon was creating The Yacht Sales Company he understood what it meant to have a rich history of sailing with the vendors he was choosing to represent and promote at his dealership. He specifically sought out Groupe Beneteau, who has the richest yachting tradition in the industry being privately owned for 130 years. This is reflected deeper in their purchase of CNB and Lagoon, who TYSC is the dealer for as well. With the dealership being located in Kemah, bordering Galveston Bay, he has much to say about family, fun, and friendships on the water. 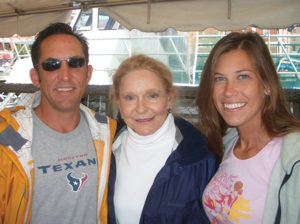 Beneteau boatyard, headquartered in France with manufacturing facilities located in South Carolina, was created in 1884 by Benjamin Beneteau. He was a very determined young man and at the early age of 12 he became a ship’s boy on the lugger, Eliza. His dream of building boats would begin on the boatyard of his friend’s father. His determination would convince his uncle, and he entered Rochefort Maritime towards the end of 1879 for his military service. Once out, he decided to create his boatyard near a bridge called, Quai des Greniers, and called his place “Beneteau.” Today, Beneteau is the largest sailboat manufacturer in the world.

The growth of Beneteau has been nothing but extraordinary, and it has acquired and incorporated Prestige, CNB, Lagoon, O’Hara, I.R.M., BH, Four Winns, Glastron, Wellcraft, Scarab and Monte Carlo Yacht. Annette Beneteau-Roux has been in command and control of Beneteau for the last 40 years and gives credit to their success to her family, executives, loyal and talented employees, as well as dealers and customers throughout the world, all of whom have become friends. “I believe we are one of the oldest boat building yards in the world to be run by the family as a majority,” said Annette Beneteau-Roux.

Another amazing line within this sailboat dynasty, that holds great family traditions, is Lagoon, which is in association with CNB Yacht Builders. The Lagoon model was established in 1984 and was originally a shipyard building monohull and multihull offshore racing boats. The first generation of cruising catamarans was launched from 1987 to 1996. They are celebrating their 30th year and today the company distributes its yachts in 53 countries. Davis said that the Lagoon is one of the dealerships best sellers! Recently, Jonathon Davis and team, won the Harvest Moon Regatta with owner John Sherer on Sherer’s Lagoon 42 against eight other boats.

When speaking with Davis, he noted that one of the oldest brands of sailing vessels in the United States was Alden. He, and wife Kim, co-captained one of their vessels, the “Krisujen,” designed by Alden.

Alden began his design career as an apprentice in 1902 and started his own design firm in 1909. He had modest success until he won his first Bermuda Race and experienced great success. His race victories were with Malabar VII and Malabar X in 1932 and continued until the long-lived design business finally closed in 2008. Today, the extensive Alden design archive has been gifted to the Hart Nautical Collections of MIT Museum. Jonathon commented that the Krisujen was a dynamic sailing experience and many wonderful memories were established while captaining this vessel. 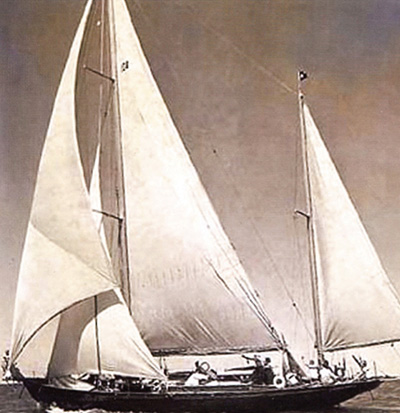 The sailing vessel, “Escapade,” built in 1938, holding an impressive amount of racing titles, and becoming known as Queen of the Great Lakes, holds deep inspiration for Jonathon Davis because of one special woman named Jean Morrison. While he was telling the tales of Jean and her exuberance for life, you can hear the admiration and excitement he had for this very special lady. With sailing stories ranging from stateside to international waters the one of the Escapade is one of his favorites. Jean’s husband was not much of a sailor but he appreciated the love that his wife had for sailing. He offered her something she couldn’t refuse. He said, “If you could have any sailboat you wanted what would it be?” Without hesitation she said, “Well, I would want the Escapade!” The vessel held a special place in her heart because she remembers cleaning it as a young girl. The request was granted and it launched an exciting time of sailing worldwide with a crew including her pet monkey. She told Jonathon once, with her childlike enthusiasm, “Jonathon, when you get as old as I am and you find something you love, you damned well better enjoy it!” He has never forgotten those words and makes it a motto for the way he views life.

To bring this story full circle, “friends” would be a good place to end. One of Jonathon Davis dearest friends and closest confidants was Roy Newberry, Sr. Roy had a vivacious life on the water and Davis states, “Everything I know about the water I owe to Roy Newberry.” Sailing brought these two together and the life long friendship never faltered. They sailed together, raced together, and actually won Jonathon’s first Harvest Moon Regatta dating back to 1992 on the sailboat, Alessandra. Jonathon admired everything about this sailor and loved his family. The stories that were shared between them are those of legends.

Jonathon so greatly respected Roy’s life in the local community and to sailing that he did a Cannon Dedication and race in appreciation of his devoted service to both humanity and the sport of sailing before his passing in 2016. Roy always told his kids, “See that crumby little boat over there; realize you can go wherever you want in the world in that!”

In the world of sailing heartstrings are pulled, passion is flared, and history is always made. Jonathon Davis and his family have enjoyed this “sailing life” for a quarter of a century and looks forward to many more years to come. Nothing is more exciting than establishing lifelong memories that are made with family, fun, and friendships due to a commitment to the sea and all that goes with it.