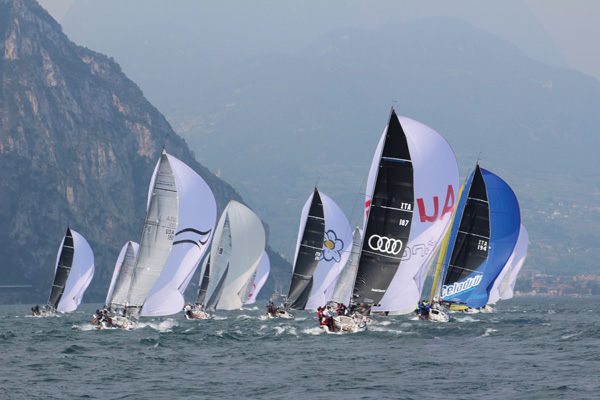 The boats on a reach at the 2015 Audi Melges 32 World Championships. 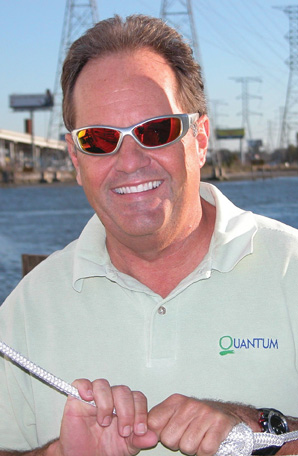 Farley lives in La Porte, runs a business in Seabrook and races sailboats all over the world. A family man, he still finds the time to sail with his kids. By the time you read this article, Farley will be back home from the 2015 Audi Melges 32 World Championships held in Trapani on Sicily Island in Italy, where he acted as coach for the Quantum Racing Team. The guy has a pretty nice gig.  How did he get so lucky?

When did you first come to this area and how did you get started in the sail making business?

I grew up in Port Arthur, and at that time there were no sailmakers in that area, so my father decided that we would take sail making up as a hobby and to help support the local sailmaking market. So by the seventh grade, I could use a sewing machine and do the service work that came into his little business. We were working out of our living room, which was 25’ x 15.’After college, in 1977, I wanted to continue sailing, and my only avenue was sailmaking. So I promised my parents that I would do it for a couple years and then get a real job. I worked for John Cameron for maybe six months, before I ran into John Kolius, who was running the Ulmer Sails loft here in Seabrook, and I have been here ever since.

What is the biggest change you have witnessed in the sail making business in the last 20 years?

Two things come to mind. The first is technology in both design and materials. Just as in every other surviving business in the world, we continue to move the boundaries forward on where we are going with design and material. In design, with the development of our own proprietary design software and the use of programs such as V Spars, we can exact the loads generated on each sail and then design that sail specifically to that load. This enables the sail to be as light in weight as possible and yet still yield to loads generated.

The second thing is how the sailmaking business has transformed from a small cottage business to a international, technology driven business, where we know every sail built around the world, who the customers is, what sails he owns, and what work has been done to those sails.  To be a leader in the service industry, you have to know your client’s needs.

The Melges 32 is a pretty physical boat in a blow — how many guys do you carry as a crew and who does what on the boat?

The Melges 32 is definitely a lesson in “Team Sports.” On the Delta Volpe teams we have playbooks, we have game films, we have team meetings to go over the game films, and we have a game plan every morning when we leave the dock. All teams are led by the “Owner Driver.” The Melges 32 is one class that has zero tolerance for anyone other than the owner to drive the boats. All of teams have “Pro Tacticians.” Our teams have Pro Mainsail and Jib/Spinnaker Trimmers. We then have a bowman, a tall, strong Mast Man, a pit person and a very athletic floater, who is a little of everything.

If you could start your business all over again what would you do differently?

That is an easy one, I would have saved all of the money we were making in the early 80s before that oil crash. That was a hard lesson for a couple young kids to learn, trying to make our business work in a down turned economy. We had done so well, that we thought it would never end, but it did. And I bet if you ask Kolius, he would say the same thing.

In your opinion why is the U.S. Olympic team so far behind some of the dominating sailing teams in the world?

Without looking deep into it, I would say that there are two Olympic sports that you have spend so much money on your equipment: Sailing and Equestrian (The rich man’s sports). And because of that, there are many times that our best sailing talent does not have the funds to fully develop their talents and skill sets.  Other countries such as England and New Zealand have large funds set aside just for the development of the best sailors in their countries. The U.S. is going to have a tough time competing with those types of programs. Although Josh Adams, Charlie McKee and even Houston’s Luther Carpenter are doing great jobs with what they have to work with, it just might not be enough. And if the sport is not careful, we could lose sailing altogether in the games.

Buddy Melges used to say “Win the start and then increase your lead.” Is that what you say to your guys when you’re coaching them?

For long regattas, such as World Championships, where we will have 12 races, we try and manage the peaks and valleys.  We love winning races, but we try and manage the starts and first legs, and then have a positive pass number throughout the race.  Let’s say we get to the first mark 11th, pass a boat here and there, take a couple with a good marker rounding and pass one more on the last beat and come in 5th.  That is a strong race in that fleet. That’s how you win regattas, staying consistent. We try and not let a bad race bring us down, we recover and get ready to race another race.

In long regattas, the first three races are very important, in that you don’t let the regatta get away from you. The middle races are fine tuning what the course and fleet give you, and you take as much as you can each race from both the fleet and the course. The next to last day you have to keep yourself in contention.  And on the last day, you want to leave the dock knowing you have a mathematical shot to win the regatta.

When is John Kolius going to be inducted into the U.S. Sailing Hall of Fame?

If there is anyone out there who deserves to be in the Hall of Fame, it has to be JK. I have nominated him twice with no luck. I will continue the nomination process until we get him there.  He was arguably one of the best boat drivers in the world from 1977 to 1995, and I believe that he has earned the right to be inducted into the Sailing Hall of Fame.