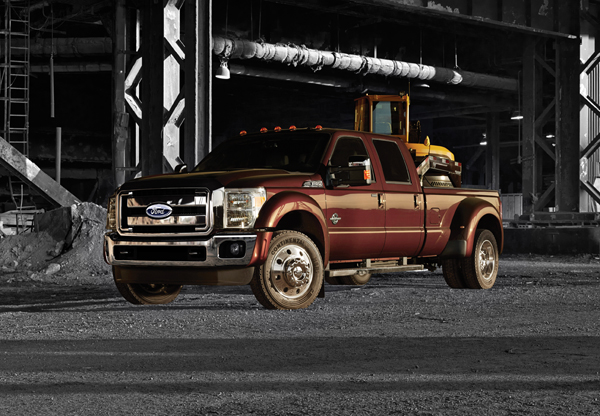 2014 promises to be a big year for the Ford Motor Company with the introduction of an all-new F-150, among others.  Until then, the blue oval has to work with what it’s got, and that’s not a bad thing. They sell more trucks than any other manufacturer.

One of the most significant improvements to the engine is a larger GT37 turbocharger that replaces the previous GT32 model, enabling more airflow to the engine and, in turn, producing more power and torque than today’s model.

Ford also engineered its six-speed transmission that uses a new torque converter to manage the increased horsepower and torque. 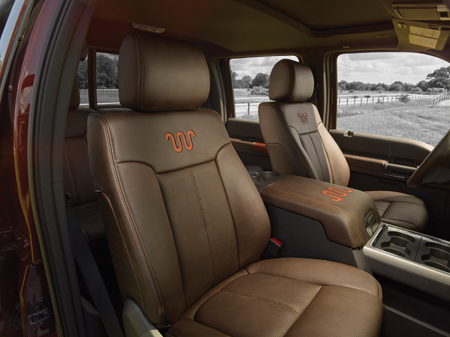 The reinvigorated interior for the 2015 Ford F-Series Super Duty King Ranch edition is inspired by the place where American ranching was born. “King Ranch is an American original with a proud heritage of hard work that defines the American ranching lifestyle,” said Doug Scott, Ford Truck group marketing manager.

“What really stood out at the actual ranch is how prominent the “Running W” is, and how it defines and unifies the ranch,” said Barb Whalen, Ford color and material design manager. “Similarly, we wanted that brand to define the new Super Duty King Ranch.”

The Running W – the brand used on cattle raised at the ranch – provides a focal point for the interior. It is stitched to make the seat backs and center console appear to have been branded. A lighter, richer shade of Mesa leather trims the seats, center console lid, armrests and steering wheel. Exterior updates include the new, darker Caribou paint for the wheel lip moldings, bumpers and lower body. The bed rail caps, bumper caps and running boards are executed in black.

Specific numbers for power, torque, horsepower and most importantly, the MSRP, weren’t released, but we’re sure they are all just as stout as the 2013’s tow rating of 24,700 pounds.