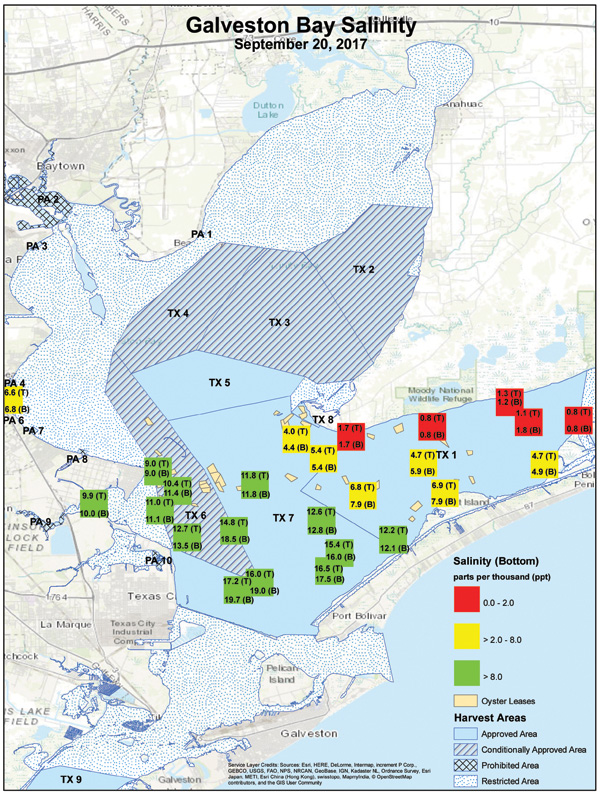 Months after the storm, we are still seeing the effects of hurricane Harvey. A massive amount of freshwater flushed through Galveston Bay and caused heavy casualties to the area’s live oyster reefs.

Galveston oysters need a balance in salinity in order to thrive, usually around 15 ppt (parts per thousand). The low salinities in many parts of Galveston and East Bay have decimated live oyster reefs, to the dismay of local oystermen and women.

In early September, Christine Jensen, TPWD Fisheries Biologist, sampled oysters from the middle of the bay and saw about 20% mortality on those reefs. The Department of State Health Services also took salinity readings (see figure below) and found that salt levels were rising in the lower parts of Galveston Bay but East Bay was still very fresh.

Jensen again sampled public reefs in October and it was determined that areas TX-1, TX-4, TX-5 and TX-6 will not open for oyster season on Nov. 1.

“East Bay experienced the worst of Harvey’s effects with very few live oysters left.  It remained too fresh for too long for most oysters to survive.  Hannas Reef had 51% mortality, Middle Reef had 95% mortality, and Frenchy’s Reef had 100% mortality.  Almost all of the restoration areas in East Bay were killed,” Jensen said.

“Some reefs on the west side of the ship channel also saw significant mortality near where Dickinson Bayou drains into the bay Dollar Reef had 90% mortality and Todds Dump had 62%. However, several reefs in the middle of the bay survived fairly well and have higher numbers of live oysters than they have had in many years.  The numbers of oysters in TX-7 were starting to rebound prior to Harvey and luckily survived with relatively low mortality.  This area will open for oyster harvest on November 1.” 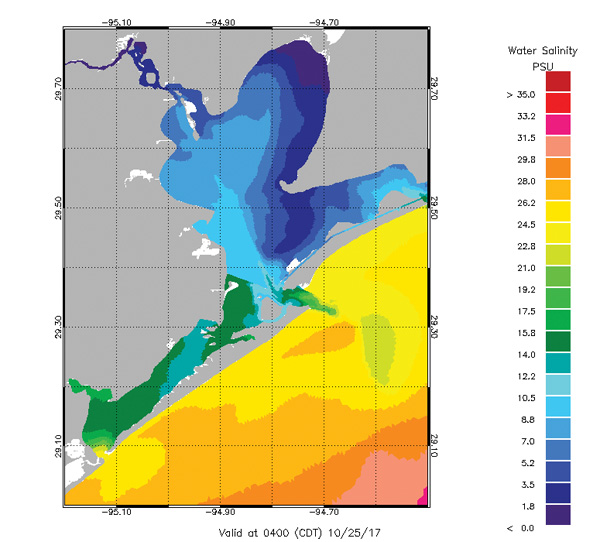 Upper Galveston, Trinity and East Bay still remain relatively fresh with salinity less than 10 ppt. But there is a silver lining; the reefs in the middle of the bay are doing well with higher catches than have been seen in many years. Also, there is a lot of clean cultch (dead shell) for oyster larvae to settle.

“A clean place for larvae to settle has always been a limiting factor in Galveston Bay for oyster numbers to rebound,” said TPWD Biologist Christine Jensen.

“Hopefully, we will see a quick return in a few years if mother nature will cooperate.”

« A Hero Nonetheless
Plastic in Paradise »