How to be a Good Skipper 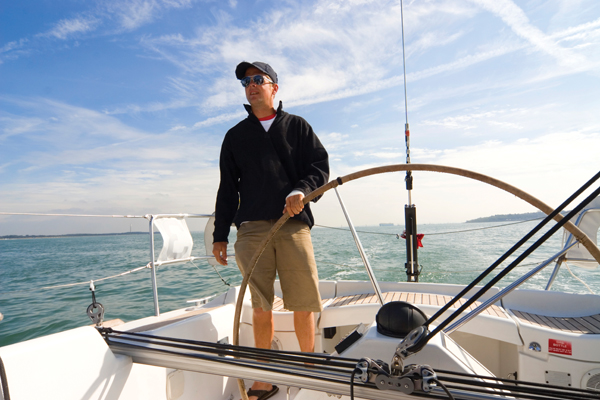 By Jon and Lori Jones

For those of us who routinely take on crew, either for racing or cruising, it is important to have a reputation as a good skipper. People who crew on other people’s boats talk, and if you get a reputation for not being a good skipper, you will soon find yourself honing your solo sailing skills.

On the other hand, if you obtain a reputation as a good skipper, folks will seek you out. But what makes a good skipper? What are crew looking for when they step on your boat? How are they judging you?

Not surprisingly, being a good sailor was the most cited desirable trait for a skipper. Most of our crew associated sailing proficiency with other desirable characteristics such as being a good teacher, being confident, and being safe – all traits that have their basis in knowing what you’re doing. For instance, Tammy said, “When I’m on a boat…even when I’m scared due my own inexperience, I am truly reassured when I can 100 percent trust the experience of the skipper that he will not put the crew or the boat at risk.” Anton said, “For sure, a good skipper needs knowledge to teach, tell stories, and sing sea-shanties.” Josh, an experienced crewmember “prefers a skipper that is a better sailor than I am, since I look at each outing as a chance to learn.” Hmmm…this might explain why Josh hasn’t sailed with us much lately.

Right after sailing ability, our crew equally cited both “no yelling” and patience as desirable traits, often linking them to remaining calm. As Nancy put it, “I do not like skippers that scream or yell or demean their crew. Remaining calm is a great trait in a skipper.” Ellen said, “I especially like the non-yelling, non-condescending skipper, which probably stems from their patience and skill.” Several of our lady crew spoke in terms of yelling, screaming, being condescending, etc. This appears to be a sore point and a common one at that. The men of the crew (along with the less traumatized ladies) used the term “patience” as a desirable trait in their skippers, which seems to us about the same thing.

On the third tier of desired traits were be a good teacher, be organized, and clearly communicate. I was surprised at how many of our crew want their skippers to be a good teachers. Apparently telling them what to do is not enough. They also want to understand what is going on. Many cited being organized and being able to clearly communicate as important so that crew can be more sure of their role and what is expected of them. As Lauren puts it, “Every good crew member expects to be flexible- to wind, weather, whims of the group, whatever. A basic sail plan with simple crew instructions and an overview of the boat’s features maximize chances that everyone will show up similar expectations and appropriate gear.”

The next most cited group of traits had to do with enjoying the sail. Cited equally often were allowing the crew to participate, creating a relaxing environment, and fostering fun. The only surprise here is how far down on the list these traits were. Having fun is certainly essential for the crew, but it was not cited by most of the crew and others cited it only after pointing our other desired traits. Perhaps having fun went without saying, so they didn’t say it.

Rounding out the list were being safety conscience, being of responsible character, looking like a sailor, having sufficient beer and rum on the boat, and knowing sea-shanties.

Other noteworthy observations: Ben said the most important quality is leadership, but he was the only one to use that word. Erik says he tends to stay clear of skippers who use terms like “avast” and “ye matey.” Cynthia wants skippers to know she isn’t looking for a date. And finally, Katherine responded to my inquiry as to what she is looking for in a skipper with just two words: cold beer.

Taking into account our crew’s input, here is our assessment of what it takes to be a good skipper.

Know navigation, good seamanship, and how to sail your boat. Know your boat’s capabilities and limitations. Know what you need to do if you get into trouble, and better yet, know enough to stay out of trouble in the first place. Your crew doesn’t need you to be an expert, but they will expect you to be competent.

Be a good leader

Foster a relaxed and fun environment

Your crew is not signing up to hunt whales in the Arctic or to exchange broadsides with privateers in the Caribbean. They sail for pleasure. Good skippers ensure the crew enjoy themselves, feel relaxed on the boat, and allow them to participate in handling the boat. So relax and sing a sea-shanty or two. Cold beer can help, too.

The good skipper understands the overriding importance of keeping the crew safe. Your crew is expecting you to watch out for them and keep them from endangering themselves through ignorance or inattention.

One Comment to “How to be a Good Skipper”