History of the Houston Yacht Club 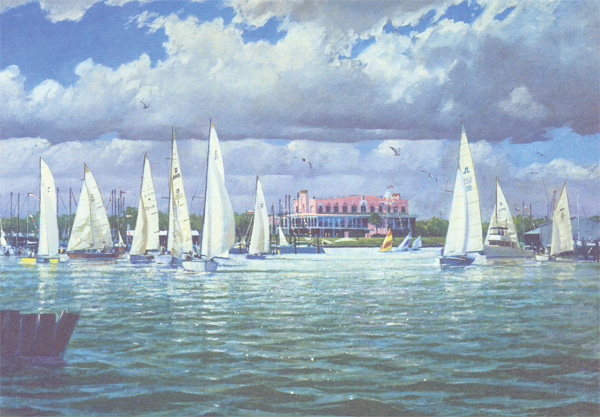 Sam Akkerman, author of the book From Buffalo Bayou to Galveston Bay: The centennial history of the Houston Yacht Club, 1897 to 1997 on how it came to fruition. 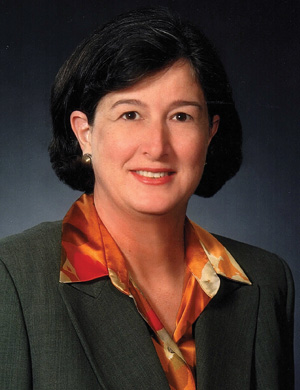 How did you get started on this project of writing the book?

I became involved in researching and writing about the history of HYC around 1995, two years before the club’s 100 year anniversary celebration. I was invited to attend one of the Centennial Committee meetings where Fleet Historian Tynes Sparks spoke and explained that one of the committee’s goals was to publish a book on the Club’s history and he needed help.

He had boxes of old photographs, clippings, and collections of stories he had been putting together for years. Few early records still existed, but Tynes knew the Club’s legendary history was worth telling and that documentation existed at the Houston Metropolitan Research Center (HMRC).

As an English major who had always enjoyed research and writing, I was intrigued. Tynes and I scheduled a visit to the HMRC.

On that initial visit we found a Houston Post article describing the first formal meeting of the Club, February 2, 1898 at the Binz Building, Houston’s first skyscraper. It was a thrilling find and I quickly became fascinated by the Club’s history stashed away in that building.

Because the Club’s founders were prominent Houstonians, I read everything I could find on the city’s history and the early 20th century development of the Galveston Bay area as a summer destination for Houston residents.

I located and interviewed many children and grandchildren of the founders and early members. They were all aware of their families’ connections to HYC and generously shared photos and stories.

What surprised you the most as you gathered information about the history of the club?

Many discoveries were made along the way. When I started, we knew that the Club originally met and kept their boats near the foot of Main Street in downtown Houston. Research enabled  us to document specific locations: for a while a wharf was leased at the foot of Travis Street and meetings were held in a ‘tin shack’ near today’s Spaghetti Warehouse.

Another important ‘discovery’ was realizing the true significance of our early membership in the Gulf Yachting Association (GYA). In 1920 we became a founding member of the venerable southern boating organization that promoted inter-club competition in affordable one design boats from Florida to Texas. A bay home was needed for the boats, practices, and competition required by the amateur, family friendly, GYA program which the Club embraced wholeheartedly. I  believe the mission HYC fulfills today was shaped by that program.

And I must mention the oft forgotten role the Club played in the early development of the Houston Ship Channel. The members were not only vocal in their support but their yachts were used to tour dignitaries and visitors who had the power to influence the legislation to dredge the Bayou and Bay into a waterway that would accommodate ocean going vessels.

This focus of the Club continued until World War I. By then the Port was well on its way to becoming the giant we know it as today. 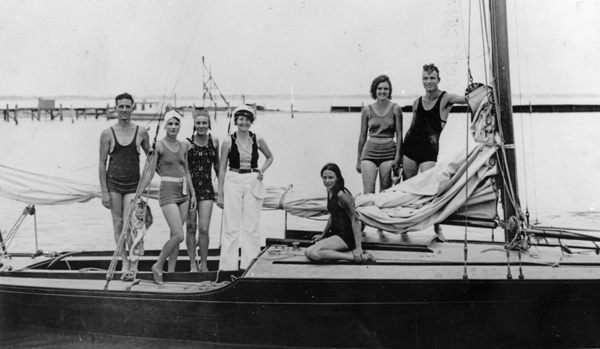 Madlin Stevenson and friends on an R-boat in the Houston Yacht Club harbor in 1929.

Is there a favorite story about some of the members that made you laugh out loud when you were doing research?

Humor reigned throughout the years. Choosing one incident is impossible. Theme parties with elaborate costumes were the norm after World War II. Props might include a live donkey in the Porthole bar or an old footed bathtub for serving “bootleg gin.” Beginning in 1936 the Dumbbell Award was presented periodically to recognize boating mishaps. Recipients and their ‘dumb’ mistakes were carefully recorded in a small gold stamped binder.  Helmsmen, not crew, falling overboard seem to have been quite common.

Where did you grow up and when did you become a member of the Houston Yacht Club?

I was born in Louisiana but grew up in Texas.  My family moved to Houston when I was 12.

In 1989, my husband bought a catamaran and we were sailing it one weekend when we saw a long line of Sunfish being towed behind a motor boat. Each boat had a young skipper on board, relaxing as they cruised along under tow. We learned they were HYC Ragnots (as the Club’s youth are called) and they were on their way across the Bay to an inter-club regatta. My daughters were 9 and 12, a perfect age to become Ragnots and the next summer I was one of the moms in the motor boats towing kids across the Bay.

Is there a favorite time period in the club’s history that really stands out in your mind?

The early years of the Club are among my favorites to study. Members had a fleet of amazing long, sleek luxury yachts which would rival any port in the south. They were prominent businessmen who worked tirelessly to promote the city and ship channel. Yet they commissioned a fleet of small one design sailboats for fair competition. Their younger members formed the Launch Club Canoe Division and explored islands in the Bayou that have long since disappeared. Their cruises were intended for family members and their regattas were events designed to be enjoyed by all ages, boaters and ‘landlubbers’ alike.

Are you currently working on any other projects?

We are proud to have a very well documented article on HYC’s history accepted and included in the recently launched Handbook of Houston, a publication of the Handbook of Texas Online, the most highly respected resource of state history.

Another months long project completed this spring is a permanent exhibit at the Club that honors HYC’s nationally recognized reputation for excellence in race management. Our research documented the national, international, and world regattas that HYC has hosted in the last 120 years. This information was then incorporated into a striking professionally designed display in the Club’s lobby. The project commemorates our 90/120 Celebration – this year the clubhouse is 90 years old and the organization is 120 years old.

Tell me a little bit about your relationship with Rice University.

In 2010 a large portion of our archives was digitized as part of an online exhibit that includes materials from Rice University and the Houston Area Digital Archives at the Houston Public Library. The exhibit, Business and Pleasure on Houston Waterways, explores the relationship Houston has with Buffalo Bayou and Galveston Bay. It was an honor for us to be included in this project and it also provided us with a unique opportunity to preserve our archival materials – the scanned images are safe – permanently stored and accessible online. As well, it  provides another method of sharing our history. 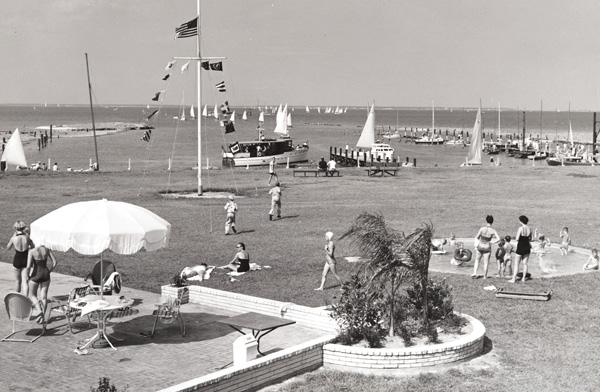 View overlooking lawn, wading pool, signal mast and harbor of the Houston Yacht Club during the Annual Regatta of 1954.

The Houston Yacht Club has a long tradition of bringing families together who love boating on Galveston Bay. In your opinion, is this still the best way to describe the mission of the club today?

Yes. Bringing together families who love the bay does describe what HYC is all about. As the older Ragnots leave for college, a new generation sails out to claim their own place in the cluster of Optis at the start line. Experienced sailors teach the sport and share their boats with novices. New volunteers join the long time volunteers who organize the programs and events for all ages and the well run regattas that make Galveston Bay a nationally known recreational boating center.