Is it time to lower the limit on speckled trout? 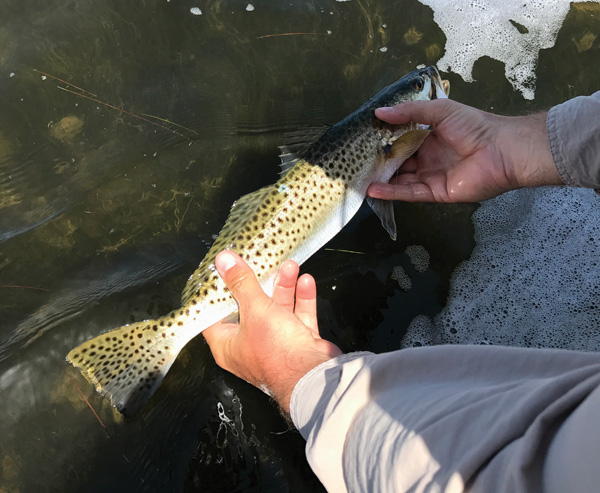 Almost every time the subject of lowering the number of fish anglers can retain crops up, a controversy arises that seems to draw a line in the sand.

Part of the problem is that there remain a large number of anglers who grew up fishing under no size or bag limits for saltwater fish.  Fifty years ago anyone would have been laughed at if they suggested placing a limit on the number of fish an individual could keep, let alone place any size restrictions on the catches.

After all, there was an endless supply of finfish and shellfish swimming the coastal waters and there was no way fishermen could even dent the populations.

Unfortunately, it did not take long to prove otherwise, as freeze events and overfishing by both commercial and recreational anglers began taking their toll on our stocks of trout, redfish and flounder.

Toward the end of the 1970s, when the Texas Parks and Wildlife Department (TPWD) was compelled to take action, the bag and size limits imposed were met with resistance by many in the fishing community.

That mentality continues to exist and was noticeable as recently as seven years ago when the TPWD held public hearings soliciting comments and opinions from anyone affected by any change in the bag limits for trout.

One meeting that was held at the TPWD Dickinson Lab almost got out of hand, as guides, marina operators and others were quite vocal in their opposition to any reduction in the number of trout allowed.

While the TPWD passed on the concerns expressed for the upper Texas Coast, they did recommend and had approved by the commissioners a reduction from 10 to five trout for anglers fishing the lower and middle coasts.

As an outdoor writer and columnist, I have been noticing an increasing number of sportsmen, including fishing guides and others with commercial interests in fishing, supporting a change in the rules.

Many of those same individuals were among the loud protesters at the hearings mentioned earlier.

I asked several of those I personally know what brought about their change of attitude?  Universally, they said that it was concern over the long-term survival of our stocks of trout.

One well-known fishing guide pointed out that the problem was of an environmental nature and that while recreational fishermen had a minimal impact, the solution required sacrifices on all ends.  There is not much individuals can do about devastating floods or severe droughts; however, they can do their part as stewards of our wildlife resources.

Each year there are increasing numbers of anglers fishing the Galveston Bay Complex and we are at the point that our resources of trout and other fish just cannot handle all of the added pressure.

At this point trout appear to be the only finfish about which there are concerns.  Reds have a three-fish slot limit and seem to be thriving well around the Galveston Bay Complex.

Several years ago the bag limit for flounder during the majority of the year was reduced from 10 to five and all indications are that the stocks are rebounding well following that change.

While anglers have a voice in the matter, the answers are going to have to come from the TPWD.  If the parties are in agreement, the process should be fairly easy to get initiated. The legislative procedures will begin to get the regulatory changes into law.

One Comment to “Is it time to lower the limit on speckled trout?”