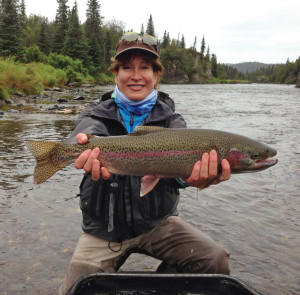 Janiece with a great Alaskan trout.

Longoria is an honors graduate of the University of Texas and received her law degree from the University Of Texas School Of Law in 1979. She is a partner with the firm of Ogden, Gibson, Brooks, Longoria & Hall LLP.

She likes to fish and we like to fish. We were wondering what was on her mind regarding the Houston Ship Channel and she was kind enough to give us this interview, we hope you like it.

The Houston Ship Channel will celebrate 100 years of service this fall. Do you plan to recognize this event with a special party?

There will be a series of commemorative projects and events promoting the historic significance of the ship channel’s contribution to the city of Houston. This will include a documentary produced by the Texas Foundation for the Arts and created for broadcast on Houston’s PBS affiliate, and a Centennial Curriculum Guide for Houston area students and educators. The major exhibition “Stories of Workforce: Celebrating the Centennial of the Houston Ship Channel,” will be on display at the Houston Public Library.  Another special event will be a private rededication ceremony on November 10, 2014 to commemorate the historic date when President Woodrow Wilson fired a cannon via remote control from his office in Washington D.C. to officially open the deep-water Houston Ship Channel for operation on November 10, 1914.

What are two things the Port of Houston can do to cut down on the water and air pollution?
The Houston Port Authority retrofitted and replaced diesel engines and is working with truckers and tenants to do the same. With the supply of natural gas from shale, we can switch to a cleaner burning fuel to power the trucks that move freight to and from the PHA facilities. The Port Authority pioneered the environmentally beneficial use of dredge materials to create marsh and wildlife habitat in the Galveston Bay system. New technology and infrastructure investments have improved efficiency for customers, reduced truck idling time, and lowered emissions for our region. The Port Authority will continue to stay at the forefront of technology advancements and innovation to assure that we remain competitive, while continuing our focus on the environment.

Are you planning any fishing trips in the near future?
My husband and I will be going on our annual fishing trip to Alaska.

What’s the biggest fish you ever caught?
A 30-inch Rainbow Trout. Caught and released, and not yet repeated.

Do you have any advice for anyone who is thinking of getting into fishing for the first time?
Take a fly fishing lesson from someone other than your spouse.