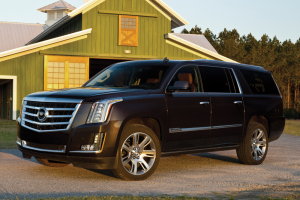 Put a lid on it! That’s pretty much what General Motors did when they created the Suburban – dubbed “Carryall” in 1935.

General Motors simply replaced the bed with a lengthened cab and put in on the same half-ton truck chassis. A GMC version quickly followed, and in 1999 Cadillac badged its own iteration called Escalade. Now comes the 12th version of the iconic “Carryall” for 2015.

The Cadillac Escalade is at the top of the food chain when it comes to full-size heavy weights; and we do mean heavy, as in poundage. Rolling out of its birthing ship in Arlington, Texas, the Escalade, branded four wheel drive Suburban, tips the scales at three tons.

Moving all that weight is a 6.2-liter V-8 delivering 420 horsepower and 460 lb.-ft. of grunt; more than enough juice to also tow another 8,000 pounds. That’s why we thought this would be the ultimate luxury hauler, not only for people and their stuff but a nice sized bass boat or camper.

The new sheet metal is fitting for a modern do-all with plenty of edgy Cadillac styling cues including LED lighting all around. This big beauty makes heads turn no matter what neighborhood you’re cruising.

Ride quality has always been part of the Cadillac success equation, and the Escalade is no different. To achieve its comfortable level, without sacrificing control, the Caddy engineers installed GM’s Magnetic Ride Control system; first developed for the Corvette. 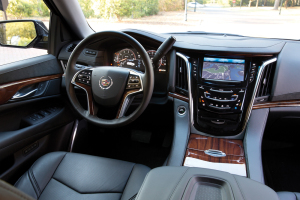 Wind and road noise used to be a given in most vehicles. Not in the Escalade. Triple door seals and lightweight, yet very effective sound deadening materials, bring a new meaning to a quiet interior.

Speaking of interiors, this is where the Escalade really shines. When we used to speak of fit and finish, our minds went to most financially unreachable rides. Say hello to a new era. Cadillac suits said, “We can do that too, but in volume,” and they did. With layered materials, cut-and-sewn craftsmanship and real wood accents, you are officially dared to compare.

Remember that heavy, old third row seat that most owners removed and stored on their dirty garage floors? No more, ‘cause there’s no need to remove it. Both the third and second row seats fold flat with the touch of a power button. Finally.
Pricing starts at $71,695, but with 72-month notes available…well, you know you want it.