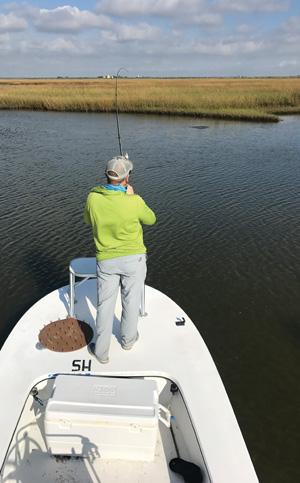 Captain Clay Sheward hooked up to a redfish deep in the marsh.

Spring may be the toughest season of all to figure out on the upper Texas Coast. It’s the first of our two annual transitional periods, and in my opinion, definitely the harder of the two to get a solid grasp on when it comes to patterning. With so many factors at play, March and April can wreck even the best made plans.

To gain a better understanding, we need to think first about where we are transitioning from. In a winter season like we’ve just had, the coldest in nearly 10 years, we truly put fish into a winter pattern. This is a pattern that can be predictable and reasonable easy to describe and understand. Fish tend to move slightly deeper and hold over certain types of structure or bay substrate. Food sources, though limited have become reliable and are somewhat easy to locate as they are larger and more visible than at other times of the year.

At the first signs of spring, anglers can often do very well. Predatory fish move from deeper to shallower water as the air and water temperatures warm. The initial warming creates added temperature to the cold blooded fish as well as their prey. This change typically makes both more active and sends predators out in search of food. But this isn’t always the easiest thing for hungry predators to accomplish.

Everything is transient in spring; both predator and prey. Temperature and barometric pressure swings wildly during this period. Weather varies from mild to violent

and boating and fishing pressure is steadily increasing.

Wind, tide, temperature and timing; all of these factors play a major role in spring fishing. But the prevalence and types of available food for predators is still limited.

Winter forage, like mullet and finfish are still present but the return, or emergence of other various food sources happens at a much slower pace than their departure during fall. Wintering crabs and shrimp that have buried in mud through the cooler months will be some of the earliest additions to the menu, followed by a slow trickle of various other small baitfish species. Keep in mind that this is a slow process that is triggered more so by the “photo period” or length of daylight versus darkness than it is by temperature. Many food sources don’t truly return in force until later in spring.

Wind is always a factor in spring, especially during the first half of the season. Light wind days are few and far between, and late season cold fronts can often push us well into the small craft advisory range. This doesn’t lend itself well to great fishing days and certainly doesn’t make spring inviting for anglers. With high winds come several other factors that influence fishing. High tides and rapid barometric pressure come to mind at the top of the list. 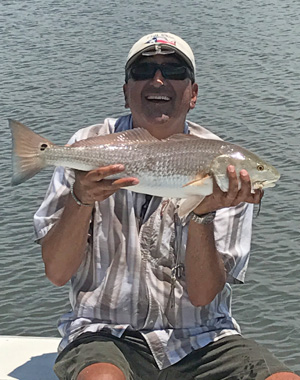 Big rising tides push small prey animals deeper into marshes and other areas where they can find cover from predation. The host of predators, like redfish, trout and flounder, will follow. Often, this puts predator and prey out of reach of most boaters and increases the overall size of the area we have to search. Fish become like needles in a haystack.

It often seems like redfish enjoy exploring new territory, and high tides are the open invitation for them to take off wandering.

The large swings in barometric pressure during spring can provide both good and bad fishing. Changes in pressure seem to create short windows of increased feeding activity, especially when they happen in conjunction with moving tides or a moon position that would already cause fish to hunt for food. We can’t fish purely around pressure changes, not predictably anyway. You can shoot for catching the big changes as fronts approach and pass the coastline, but safety and comfort are often compromised. More often than not, most of us as anglers are stuck with the days that we can get on the water. It’s interesting to note, that even small changes in the direction of barometric pressure movement can effect fish feeding behaviors. Steady pressure, or pressure that is steadily on the rise or fall, often yields stagnant fish feeding

Timing, as I mentioned earlier, can have a huge impact on our success rates in fishing. Knowing seasonal patterns is very helpful in understanding when fish tend to feed in certain areas. If you don’t have years of fishing log information, then you can only go and hope for the best in finding actively feeding fish or rely on local information. Often, springtime doesn’t follow the typical feeding periods normally associated with summer. Don’t be one of the anglers that hunt out a summer feeding pattern this early in the year.

Bottom line, springtime fishing requires more thought on average than any other season along the coast. Careful planning, understanding the conditions, researching or having years of experience can help greatly. Knowing the available food sources, and making appropriate adjustments in your lure arsenal can pay off with big dividends. Most of the new arrivals of prey animals are quite small, which often leads to day where even larger predatory species are focused on eating small but numerous meals.

With careful planning, and an educated approach, spring can pay big dividends of big trout. But, if you think that you’re going to find a summer pattern just because of the rapid warm up, you will be in for quite the surprise.

Get out and enjoy the warmer weather, and don’t be discouraged by the difficulties. Instead, use the time wisely to cover more water and seek out the patterns hidden within the season.

« Fishing After a Cold Winter
Galati Yacht Sales: A Name You Can Trust »