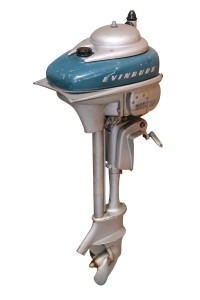 An early model Evinrude motor. Check out Acie’s Outboards in Dickinson, they have a cool collection of vintage outboards.

Do you remember the first time you tried to start an outboard motor? Grab the handle and give it a tug, and, if you were lucky, it started on the second or third pull.

Back in 1907 Theodore Roosevelt was president, the Chicago Cubs beat the Detroit Tigers 4-0 to win the World Series and a young Norwegian immigrant was working hard on a new invention that would revolutionize the boating industry.

Ole Evinrude liked to build things. He was fascinated with the new internal combustion engine and he saw the potential for a new idea that would one day make him famous.

Ole Evinrude started out as a mechanic and a pattern maker. After moving to Milwaukee he formed a company, Clemick & Evinrude. The sole purpose of this company was to manufacture standardized engines for the small automobile builders that were springing up all over the area.

After a while the business failed and Evinrude went back to pattern making in a small shop outside Milwaukee near the Kinnickinnick River. One hot August afternoon Ole and his lady friend, Bess, went on a picnic with friends. They rented a little boat and rowed out to an island on a lake near town. During lunch Bess expressed her desire to eat some ice cream. The closest town was a mile away. Ole rowed back to town, got some ice cream and then headed out for the long row back to the party. Along the way the ice cream melted. As soon as the picnic was over, he dropped Bess off at her home and he went back to the shop and started working on his invention. The rest is history.

A short time later Ole took his new invention down to the Kinnickinnick River and rented an old row boat for 50 cents, which was a lot of money in that day. He strapped on the engine and then fired it up. To everyone’s amazement, the new invention worked, it pushed the little row boat around at five miles per hour. People stopped what they were doing and looked on in wonder as Ole demonstrated his new engine. The next day he loaned the engine to a friend who was going fishing. Later that day the friend came back with 10 orders for the new invention.

Ole married Bess. He started a company and they formed a perfect team. He was the mechanical genius and she handled the marketing and sales.

The Evinrude name has been associated with outboard motors for over 100 years.

Evinrude E-TEC was the first outboard engine technology to win the American Environmental Protection Agency 2004 Clean Air Excellence Award. Chances are you have owned an Evinrude at some point in your life. Today all Evinrude motors are built and assembled in Sturtevant, Wisc., south of Milwaukee.