Oysters as Aphrodisiacs – Fact or Fiction? 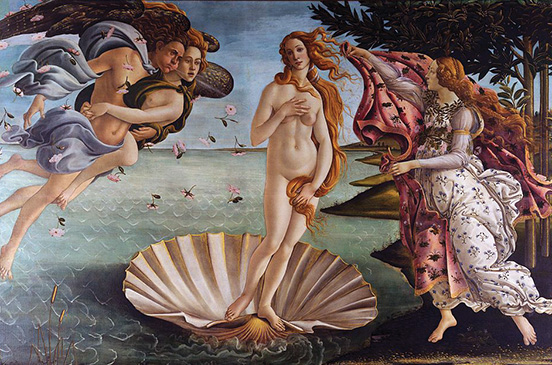 “The Birth of Venus” by Sondra Botticelli.

A candle light dinner out, a bottle of wine, a plate of oysters and the mood is set. It is a foregone conclusion that the supper is foreplay for the evening. Often hailed as an aphrodisiac, the succulent morsels, are suggestive at best, of romance. Myth or fact, the reputation of the oysters precedes the stories such as the prolific lover Casanova, who supposedly ate 50 oysters for breakfast. Scientists have been trying to prove or disprove the rumors for eons.

According to legend, Aphrodite sprang from the sea on an oyster shell and immediately gave birth to a son. Not surprisingly, seafood, especially oysters, have long had a reputation as aphrodisiacs. The Romans called Aphrodite Venus, and her creation story has inspired much art including the famous 15th century painting “The Birth of Venus” by Sondra Botticelli.

Oysters contain hormone-inducing amino acids effective in spring which is supposed to add to the effect. Spring is the time of year when the shellfish have their greatest potency as an aphrodisiac. American and Italian researchers studied bivalve molluscs, a group of shellfish including oysters, which were found to be rich in a rare amino acid that triggered increased levels of sexual potency.

A 40-year scientist George Fisher, a professor of chemistry at Barry University, Miami, who led the research team with his graduate student Raul Mirza and Antimo D’Aniello, of the Laboratory of Neurobiology in Naples, believes this is the first scientific evidence of the proof of oysters as an aphrodisiac.

For many years, the myth speculated the power of oysters centered on the refueling powers of the high zinc content of a mineral found in sperm. Men lose between one and three milligrams per ejaculation.

Fisher and his team, partly funded by the United States National Institutes of Health, took samples of bivalve molluscs from fish markets near Dr. D’Aniello’s Naples laboratory. According to Fisher, using a process called high-performance liquid chromatography to identify which amino acids were present and in what quantities, the team found two unusual ones – D-aspartic acid (D-Asp) and N-methyl-D-aspartate (NMDA), unusual amino acids not found in nature.

Results in earlier experiments by D’Aniello found that injecting rodents with the amino acids triggered a chain reaction of hormones that ended with the production of testosterone in males and progesterone in females. An increase in these levels of those hormones in the blood creates more sexual activity. “Spring, when the molluscs themselves are breeding, is best. There is the highest concentration of these two amino acids then.”

D’Aniello believes these findings show that the Italians have been right about oysters as aphrodisiacs for centuries, dating back to before the time of the Romans. The results are best when the oysters are eaten raw.

Some discount these findings as false, not believing in the research proving oysters as aphrodisiacs.

Myth or fact? No one knows for sure. The human mind can convince itself of almost anything. Final judgment must be left up to the individual enjoying the slippery little suckers.

In Casanova’s memoirs, Volume Six, he admitted to seducing 122 women, detailing how to best serve the delicacies.

“I placed the shell on the edge of her lips and after a good deal of laughing, she sucked in the oyster, which she held between her lips. I instantly recovered it by placing my lips on hers.”

« A Word On Winter Wahoo
The economic impact of oysters »