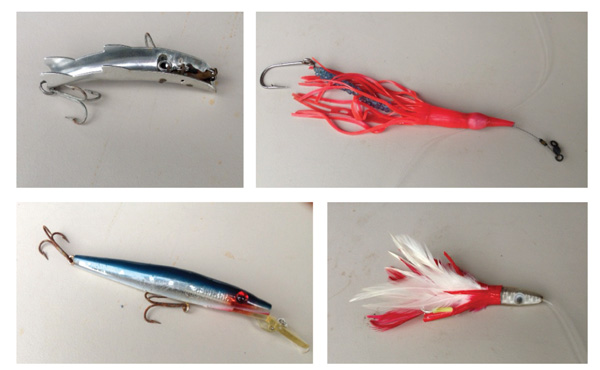 Examples of productive trolling lures for the Texas coast.

Trolling Techniques For Those New to Offshore Fishing

For several years, offshore anglers have been dealing with an unusually large crop of seaweed in the Gulf of Mexico and, while there are definite benefits to fishing created by the masses of weed patches and weed lines, it is a nuisance for boats trolling for fish.

This summer there has been a major reduction in the quantities of seaweed pushed into the Gulf of Mexico.  While anglers like to fish around the patches and lines of this vegetation, beach goers and fishermen who like to troll are welcoming the change.

When seaweed is thick in Gulf Waters it causes frustration with captains having to frequently reel in their baits, remove it and then let out their trolling lines again.  For at least three years now it has been again and again and again.

With all of the other successful techniques for catching offshore fish, I personally abandoned trolling in seaweed infested areas which included most of the nearshore Gulf waters.

This year it appears that trolling will be much less frustrating and, for those not experienced at this method of fishing, hopefully these pointers and suggestions will get you started and produce some nice fish. For purposes of this article, our discussion will be limited to trolling nearshore waters up to approximately 50 miles offshore.

Deep water trolling requires different techniques and baits than what would be required for nearshore trolling.

Trolling can be one of the more enjoyable ways to fish as the boat is moving and generating its own breeze during days of light to calm winds. 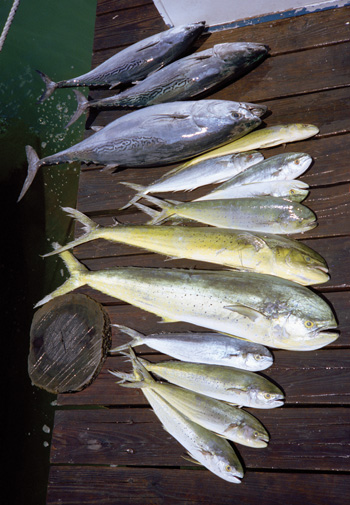 Any size of boat capable of going offshore is a candidate for trolling.

The most common fish that hit trolled baits in nearshore waters are king mackerel, bonito, Dorado, ling and barracuda.  King, bonito and Dorado are easily attracted to trolled baits.

So, now that you know what fish will be targeted, let’s discuss what baits are best.  Well, the standard answer is the ones that catch fish.  The group is divided into natural versus artificial, with artificials being the most popular.

My favorite for natural baits is the ribbonfish.  Rigged properly and trolled near to or on the surface they are awesome.  This bait works especially well around the rigs and anchored shrimp boats when trolled slowly.

In the artificial group, Russell Lures and King Getters are outstanding for king mackerel.  Other fish will hit them but kings tend to have a keen eye for this favorite bait.  This is another bait that is trolled slowly.

A whole column could easily be written about the various offshore trolling baits and, if new to this sport, visit a tackle shop that carries a wide variety of offshore baits for recommendations.

The next question is how many lines should you troll?  For newcomers I recommend no more than two, as experience will teach you more about trolling and how to troll more lines without getting them tangled.

One of the biggest differences between nearshore and deep-water trolling is in the speed.  Nearshore baits are trolled at slower speeds overall.

How far should the trolled bait be from the transom of the boat?  My rule of thumb is approximately three times the length of the boat.  Again, experience will help you determine the best distance.

How fast should you troll? Just fast enough to keep your bait near the surface.  It your speed allows your bait to occasionally break the surface, that is even better.

When a strike occurs, slow the speed of your boat but do not come to a stop, as fish can more easily spit out the hook, especially with treble hooks.

Trolling rods are generally shorter and stiffer than rods used for drift fishing or casting.  The reels need to be such that they can withstand more tension and carry larger amounts of line.

Chumming, or dropping excess bait into the water, while trolling, adds to the odds of attracting fish to your baits.

If you haven’t trolled while fishing offshore, give it a try.  The first time you hear that reel start singing, chances are you will be hooked!