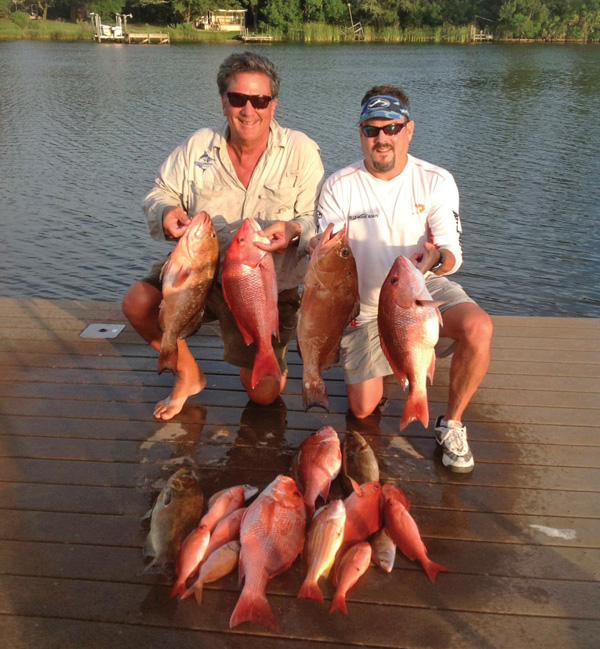 Alex Leva, left, and Tim Long with a mixed bag of fish.

Blue Wave Boats is excited to announce that long-time industry professional, Alex Leva has joined the company as manufacturer representative and director of fishing.

In his new role with the brand, Leva will be responsible for manufacturer and dealer relations in Florida and the entire East Coast.  Steven Parks, Blue Wave president commented, “We are thrilled to bring Alex on board.  Not only is he well respected for his work with other leading boat brands, he’s got a great eye for design, growth and marketing opportunities.  His experience will be invaluable as we continue to grow the brand.”

Leva is a 33-year veteran in the boating industry, having most recently served as president of HydraSports Custom Boats. Under his leadership HydraSports Custom brought the world’s largest center console, the 53 Suenos, to market.

A little-known fact is in 1999 Leva visited the Blue Wave facility in Oklahoma with his friend and fishing buddy, Tim Long, to explore positions as reps.  While Leva decided to stay with HydraSports, Long joined Parks Manufacturing and became a minor partner in 2017.  Leva remained close to his friend Tim as well as the Parks family, who developed the Blue Wave and Silver Wave brands of boats.

Leva states, “What attracted me to the Blue Wave brand in the first place is what brings me back today; the versatility, performance and pricing of the boats is without comparison in the industry.”  Leva is especially drawn to the 2800 Pure Hybrid and the 2400 Pure Bay for their inshore, skinny water capabilities and their ability to run 40 miles offshore into the Gulf.  Leva goes on to say, “These hulls are magic.  I totally understand why the Blue Wave brand is the go-to boat for the top guides in Texas and Louisiana.  It’s going to be a lot of fun bringing these boats to Florida and the East Coast.”

Blue Wave was founded in 1992 and is headquartered in Seminole, OK. Blue Wave builds bay boats from 20’ to 28.’  In 2017 Blue Wave announced the 2800 Pure Hybrid, the world’s largest bay boat.  This model immediately gained the boating industry’s attention, even earning a Best Boat title from Florida Sportsman Magazine.