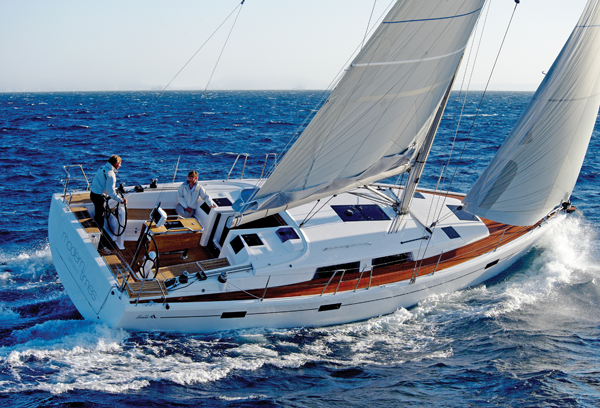 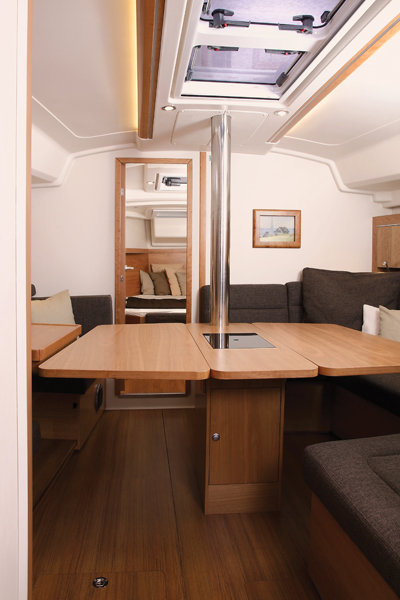 Last summer I had a chance to sail a new Hanse 415 on Galveston Bay.  I’d heard of Hanse, a German production sailboat company very popular in Europe, but had not sailed one, so, of course, I jumped at the chance.

My first impression was of a sleek, modern-looking sailing machine with uncluttered deck and European styling.  It looked much bigger than her 39’4” would suggest due to the ample freeboard, plumb bow and flat transom.

According to Hanse, most owners opt for the fully battened mainsail instead of the increasingly popular in-mast furling.  This boat was no exception and it was clear most of the horsepower comes from the main.  The mast is noticeably forward of center and the boom comes all the way back to the transom, allowing for a large (565 sf) and powerful mainsail.  The jib is a single-sheet, self-tacker, unique to Hanse.  The jib sheet connects to a traveler-like arrangement forward of the mast replacing the need for a jib-boom on other self-tacking rigs I’ve encountered.

My first impression of uncluttered decks was confirmed.  Other than a tank fill cap, I found not a single fitting on the deck itself.  The cockpit was similarly uncluttered with all lines being led aft underneath molded runners on deck and then into molded cockpit lockers.  The entire boat is noticeably lacking in trip hazards and toe-stubbers. 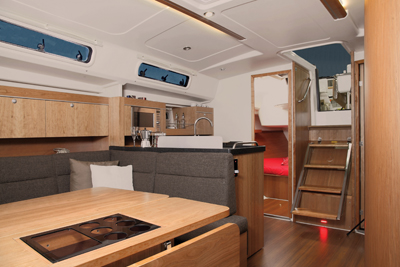 The transom itself drops down “tailgate” fashion, which is becoming the norm for swim platforms.  Twin helms are also becoming the norm, but unlike most production boats, Hanse’s rack and pinion steering allows each wheel to be independent.  If one steering mechanism fails, the other can compensate.  There is no emergency tiller on board – the other helm is the emergency tiller.

Down below, the Hanse 415 does not disappoint.  Straight lines and 90 degree angles on the interior cabinetry gives the perception of more space and makes the boat feel more home-y, and less boat-y.  Interior woods come in a variety of types and shades.  The model I saw was outfitted in American cherry.  Interior doors were substantial including hardware more like what you find in a home than on the typical boat.

As nice as it was below, I came out to sail the boat.  On our test sail, we had steady 10-12 knot winds from the SSE and calm seas.  We motored easily past the Kemah boardwalk with the boat’s Volvo-saildrive and two-blade folding propeller.  Steering was easy, two fingers being more than enough to steer the boat under engine.

This Hanse 415 was equipped with an electric main halyard winch, so raising sail consisted of turning into the wind, unzipping the lazy bag and pushing the button.  Falling off a bit, we unfurled the jib and the boat quickly achieved 5.5 knots close hauled.  Falling off the wind, we picked up to just under 7.5 knots with only a slight adjustment of the jib sheet.

Tacking the boat was ridiculously easy.  From the helm, I announced “tacking,” and turned the boat through the wind with just one hand.  The self-tacking jib slid across the deck and settled in on the new tack.  Nothing touched, no sheets to let fly, no need to trim the sheet.  And just like that, we were back up to speed.

The Hanse 415 is a cruising boat, no doubt.  It is roomy and well appointed.  She was quite impressive under sail with a powerful sail plan and performance-minded rudder and keel.  Not only will this boat be very comfortable at the anchorage, she can get there quickly, too.