A Double Edged Sword for Anglers

The Galveston Jetties are comprised of two sets of Granite Rocks known as the North and South Jetties that extend close to five miles out from shore. The South Jetty is located on the Galveston side while the North Jetty has its home on the Bolivar side.

The jetties were built to protect the Galveston/Houston Ship Channel from erosion and wind in order to keep the entrance to Galveston Bay open for all vessels.  Construction began in the late 1800s and was completed around the beginning of the 20th century.

The jetties brought a new dimension to fishing, as the rocks attracted all types of crustaceans and fin fish.  Early on, anglers would catch grouper, mackerel and even red snapper along the rocks.  Tarpon were also plentiful for jetty fishermen.

While most of those species are rarely found around the jetties any longer, the rocks continue to attract a wide variety of both inshore and offshore fish as well as fishermen.

While the virtues of fishing are high on the benefits offered by the jetties, there are dangers that lurk.  Early on the most common fatality came from small boats rounding the end of the North Jetty to fish the Gulf side.  Many times the attendant at the South Jetty Lighthouse would call in a distress report after observing a small boat capsizing in the turbulent waters at the end of the North Jetty.

For that reason and others, a cut was constructed in the North Jetty not far from shore and was and still is called the North Jetty Boat Cut.  It too added another dimension for fishing and safety for boaters.

For years, the greatest peril facing jetty fishermen in boats were the strong currents found along the channel side of both jetties.  Often the current would change so rapidly that boaters did not have time to react and found their boat pushed into the rocks with major damage resulting.  Wakes from large vessels also were potential trouble makers and while those perils continue to exist, boaters are more aware of them today.

In recent years still another danger has emerged and that has been caused by the subsidence of the century old granite rocks.  This has been a gradual process; however, the sinking continues.

Today, the submerging rocks are probably the greatest of the perils.

I have fished the jetties for well over 50 years and recall my early offshore fishing days when I would return from a trip and see the jetties from at least five miles away.  Today, that is not the case, as the rocks do not become clearly visible until within a mile or less.

The big dangers come in poor light such as night time navigation or in the early morning hours.  For several years now multiple mishaps have occurred where captains misjudged the end of the jetties and crashed into the rocks.  The picture accompanying this article is a good example and was taken in August of this year.

During periods of higher than normal tides, such as during storm tides associated with events in the Gulf, much of the jetties are under water or barely above the surface.

While it is not feasible to raise the rocks or economical to add new layers, there are things that can and should be done.  First and foremost is adding lights or lighted buoys along both jetties.

Signs also would help alert newcomers about the dangers.

While these suggestions might not eliminate all tragedies, they would be a major step and could save some lives and preserve this iconic fishing territory for generations of anglers to come. 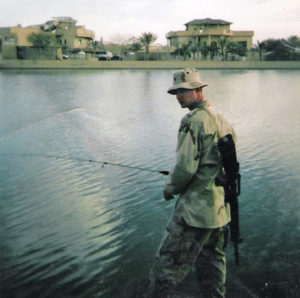 Where are you from?

I was born in Hagåtña, Guam but I grew up all over America. My dad was in the military my whole life and then I joined the military myself. I settled down here in the Galveston Bay area after I retired.

What branch of the U.S. military did you serve in?

I was in the Marine Corps. I finished service there and then joined the Army and was assigned to the 82nd Airborne Division. I was trained as a combat diver and paratrooper. I jumped out of planes and all that fun stuff. I was a machine gunner in Iraq, too – not much use for a diver in the sand. I deployed to Iraq five times between 2005 and 2011.

What do you do now that you’re out of the service?

I kayak fish a minimum four to five times a week. Sometimes I can go two to three months without missing a day of fishing.

I like to fish. It’s relaxing when I go out there. Sometimes if I spot a school of redfish I won’t even cast to them, I’ll see how long I can follow them.

But I don’t eat fish. I ate fish every day growing up, a couple times a day. I’ve fished my whole life, starting in Guam. I’ve fished all over the United States and even in Iraq.

What’s there to catch in Guam?

Mostly pelagics but also different kinds of snapper. Guam is smaller than the city of Houston and surrounded by very deep water. You can fish in 1,200 feet of water from a pier and catch tuna. The Mariana Trench is just off the shore of Guam.

Florida Keys. I go there twice a year. I take my wife and kids and they do “wife and kids stuff” and I go fish. My favorite place in Texas is the Port Aransas area. It’s pretty good for kayak fishing because you get other stuff besides just redfish and trout without going six or seven miles offshore like in Galveston. I just picked up a Hobie Tandem Island just to go past the breakers. I’m on a mission for kingfish this year.

Do you have a favorite fishing moment?

The first time I got my son on a fish. He had just turned 4 years old and it was just a little 15” rat red, but he brought it in on his own. He casted and reeled it in all by himself on a spiderman pole and chickenboy lure. 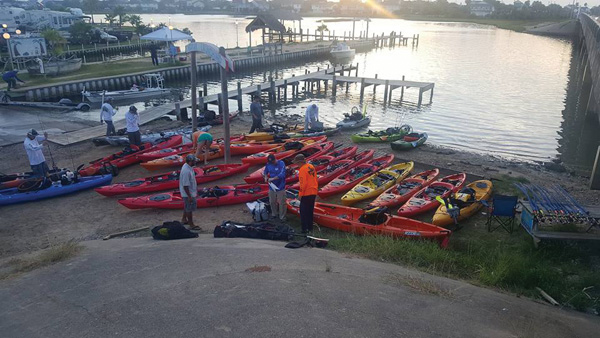 Tell me about your involvement with the community and veterans.

For the past few years I’ve been a member of Heroes on the Water – Southeast Texas Chapter, which organizes kayak fishing trips for active-duty military and U.S. veterans. They bring the kayaks and all of the fishing equipment; they supply everything. The only thing veterans need to bring is a fishing license. They started in Texas but there are chapters all over the states.

Veterans can relax out on the water for a little peace. They don’t necessarily have to fish; some just paddle around to take a break and clear their minds. Heroes on the Water concentrates on disabled veterans, but all veterans and service members are welcome.

I fell into it because it gives you a chance to be normal and meet people who have gone through the same things you have. I go out for every event I can. They need experienced people and sometimes we lack enough volunteers.

How can a veteran or volunteer get involved with Heroes on the Water?

They can visit heroesonthewater.org for information on the closest chapter, and most chapters have a Facebook page.

I understand you put your kayak collection to work during Hurricane Harvey.

Yeah, me and two neighbors on kayaks, and a handful of neighbors on big lifted trucks, got a couple dozen people out of their homes. The water was so high in some neighborhoods that we did rescues out of second story windows

Right on. In what areas did you perform rescues?

Friendswood and Dickinson. Boats were awesome for rescue but there were dry patches in some neighborhoods. So boats would tow us as far as they could go, and we would go get people and bring them back to the boats. We even rescued nine border collies that are featured in Alpo ads and commercials. 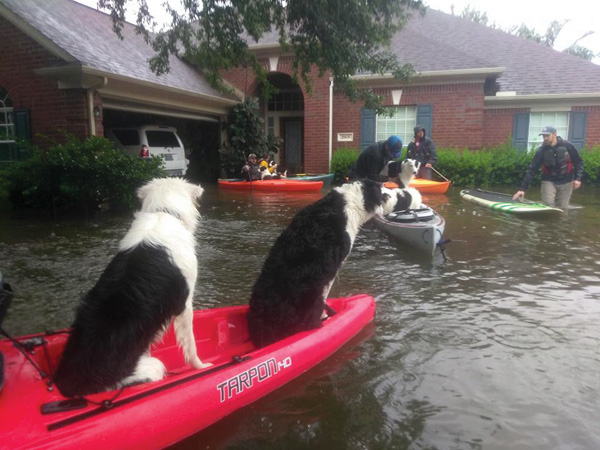 Border Collies being rescued by Donald Justin after Hurricane Harvey.

My family was affected and actually my own border collie, Murphy, rode in my kayak that day. It was a real bad time but great to see so many good people come together. Were you affected by the storm?

I live in Webster and my whole neighborhood lucked out. Everyone came together though; cooking for people, collecting donations and opening their doors. I had three people that we didn’t know live in our house for four months. Their son has special needs and there wasn’t a place for them.

Well, aside from helping others and fishing, what else are you passionate about?

Old BMWs. I have 22 various BMWs. I’m driving a 1990 BMW today that’s probably nicer inside than most 2018 models; no stains, rips, tears…everything is flawless.

Wow, is that your favorite BMW?

No, that’s the only one I’m willing to put miles on. My favorite is my 1991 E30 318is; it was only available for one year here in the States. It’s a slick top, turboed and has everything done to it. I’m giving it to my son one day. (without the turbo).