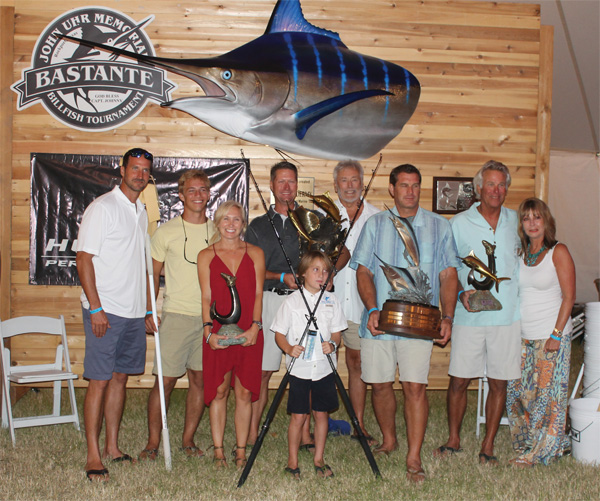 I started my travels in Rockport to write about the 2015 Bastante John Uhr Memorial Billfish Tournament, only a few years old and still going through growing pains. The offshore registration saw some great boats and the inshore division proved to net a record breaking Calcutta of $71,500.

Bastante means “more than enough” and the tournament’s name honors the memory and the life of Captain John Uhr.  The mission of Bastante is to raise money for The American Cancer Society Relay for Life, The Boy Scouts of America, The Rockport-Fulton Humane Society and Adoption Center and The Rockport Aquarium.

Uhr was well known around the world for his passion of sportfishing. His humorous personality and love for life led him into the hearts of just about everyone that met him. His first offshore boat was named Bastante so in his younger years he was known by those closest to him was Johnny “Bastante.”

John Uhr lost his battle with cancer on December 30, 2010, just shy of his 49th birthday, leaving behind his beautiful wife, Cindy and young son, Jackson. He was considered a living legend by some and countless stories continue to be told by family and friends about his many outdoors adventures.

During last year’s Bastante tournament, the Texas state record blue marlin was caught by Team Legacy, captained by Kevin Deerman and owned by George Gartner. The Legacy has fished Bastante every year and returned in 2015 to defend their title.

Tami Noling, founder and director of the tournament, was one of Uhr’s closest friends and was asked time and again to organize a billfishing tournament out of Rockport. Tami is well known around the world in her own right as one of the top lady billfish anglers so starting Bastante was a natural fit!

Registration this year was held at Poor Man’s Country Club on Wednesday, July 8, with eight offshore boats with a total of $46,750 prize money. Then on Friday, the Calcutta for the bay fishing division was held with 21 boats and a whopping $71,150 total of prize money, setting a new record for the inshore tournament.

Taking top spot for kingfish was Gaff ‘em & Stack ‘em with 61.75 total weight and first and third place with a 37.9 and 23.85 pounders. Second place went to Reel Keen with a total weight of 52-pounds and Todd Caspary took second place with a 33.75 kingfish. Caspary donated his winnings to American Cancer Society as he does every year. Third overall went to Ojos Loco with 34.05 pound total weight.

The redfish top spot went to Da Boys with 8.95 pounds, second place to How Deep Is It Here with 8.77 pounds and third to RJB Trucking with 8.57 pounds.

Top honors for trout fishing went to CLS with a 4.98 pound-fish, second to TRI Country with 4.93 pounds and M&P Produce with 4.70 pounds.

When was the first Bastante?

Tami Noling: We held the first tournament in 2012.

What inspired you to organize this tournament?

TN: I had helped run other tournaments in the Caribbean and Mexico, but never in the U.S.  Johnny nagged me for years and years to do one in Rockport and I would give him the “Oh brother”…”yeah right”…”you’re crazy” speeches.  There was no question or “maybe I’ll do one” after he died.  It was more like, “When, where and who’s in with me?!”

Describe how it all came together and the experience of being on the other side of a big game fishing tournament.

TN: I had been on the other side of tournaments before. There’s pressure of course, but I’ve never been one to buckle under pressure. And knowing it’s all for Johnny makes me stronger and more confident in all aspects of the whole gig.  I’m a tough, salty fishhead and my dad raised me to have some pretty thick skin. That all started at the age of two when my father took me fishing for the first time.  I’ve loved it for 50-plus years now.

What has been the most rewarding part of organizing this tournament?

TN: The people involved. The crew that gathers to volunteer each year and help me with the tournament are just amazing, and they do it out of love. It’s a love that can be felt during the whole event. I’ve even had several people come up to me during an evening party and make a point to tell me how they can feel the love. Our sponsors are another amazing part of the tournament; most of them knew Johnny and proudly sponsor to ensure this event can happen year after year.