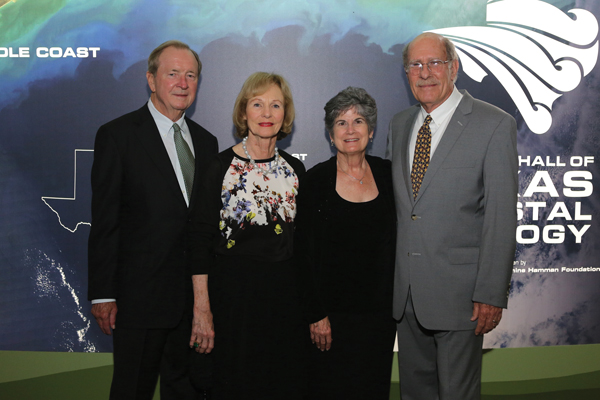 Henry and Ann Hamman, on left, with Kathy and Wes Tunnell.

We recently caught up with Dr. Wes Tunnell, who provided the expertise for the Hamman Hall of Texas Coastal Ecology.

What’s the number one goal for the Hamman Hall of Texas Coastal Ecology at the Museum of Natural Science?

To teach people about the ecological treasures of the Texas coast and inspire them to want to sustain and conserve it for future generations.

So many people are moving to the coast, how do we maintain a balance between coastal ecology and residential and commercial development?

It is important for coastal planners to utilize the best available technologies and best available science when coastal areas are to be developed. We have many years of experience now on what we should not do, and we likewise have many new ways of doing things that will help preserve the environment. State and federal agencies have many environmental protocols to be followed, and environmental assessments and impact statements guide new developments with the best available technologies and science. There are also many new and successful restoration technologies being implemented that bring back degraded coastal habitats, and the Hamman Hall demonstrates a number of these, such as oyster reef and salt marsh restoration, in addition to species conservation stories about the Brown Pelican, Whooping Crane, and Kemp’s ridley sea turtle.

How long have you been doing research on the coastal ecology of Texas?

I started my career as a student at Texas A&I University (now Texas A&M University-Kingsville) in the mid-1960s, so almost 50 years. Specifically and important for the Hamman Hall, I taught a graduate course in Texas Coastal Ecology for almost 25 years, where we took an annual trip of the entire coast. Over the years I have published over 100 scientific papers and book chapters, as well as 7 books, most of which are one Texas coastal ecology or Mexico coral reef ecology. 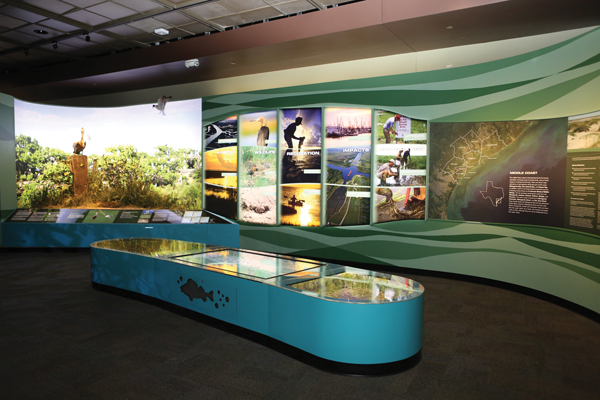 When did the coastal prairies as we know them get their start?

They probably started coming into existence during the geologic time period known as the Pleistocene (Ice Age), between 2.5 million and about 11.5 thousand years ago. The current configuration of the Texas coast line began taking shape about 5,000 to 4,500 years before present, when sea level rise slowed its transgression across the continental shelf from about 45-50 miles east and 300-450 feet depth, starting about 18,000 years ago. When sea level reached its present position, about 2,800 to 2,500 years before present the barrier islands and peninsulas that we know today took shape, as well as the coastal plains, bays, estuaries, and lagoons behind them.

For the first time in a long while Texas is getting rain. In some cases too much, how will this affect the fishing along the Texas Coast?

Texas is known for great fluctuations in weather, and these environmental variations are natural processes that affect the coast and species that live here. Most organisms that live along the coast are adapted to this kind of changing environment, but long time droughts, as well as short-lived and longer flood periods will affect the distribution of marine life in the bay. The Texas coast is a natural laboratory for studying salinity effects on organisms that live in our bays and estuaries. This is one of the main topics explained in the new Hamman Hall. With lots of rainfall and freshwater inflow to the upper coast, we see lots of oyster reefs and salt marshes, but on the lower coast, where evaporation exceeds precipitation, the Laguna Madre has hypersaline conditions most of the time (salinities higher than the open ocean). Before humans protected our Texas natural inlets with stone jetties between the estuaries and open Gulf, we may have seen conditions on the lower coast like we more recently have seen in the Laguna Madre de Tamaulipas just south of the Rio Grande. During drought times, the inlets would close and the lagoon would begin to evaporate until nothing was left but very salty waters and brine shrimp. Then a hurricane would come along and dump huge quantities of rainfall on the land and into the lagoon, which would swell high enough to reopen the tidal inlets through the barrier islands and flush out the entire system. Slowly, invertebrates and fish would return, and peak harvests of shrimp and fish would be harvested for several years until the barrier island passes silted shut again and salinities rose too high for marine life. This boom or bust cycle may have been present in South Texas 100s of years ago. So, we may see some species change in abundance with all the current rainfall and flushing of the bays, but others will come back to levels normal to the environmental conditions that they prefer or find optimal.

Who influenced you the most and how?

Besides my Dad, who took me outside hunting and fishing a bunch when I was a kid and taught me how to enjoy and love nature, my major professor for my BS and MS degrees influenced my career choice the most. My Dad, who was a physician, told me he did not care what profession I chose, just as long as it was something I enjoyed doing and that I do the best I could at it. Dr. Allan Chaney, a Professor of Biology in Kingsville, taught me the joys of hands-on, field-oriented biology. He showed me that you learn it best when you are immersed in the natural world, not just studying it from books or labs. The famous early biologist/naturalist Louis Agassiz stated it similarly on an old board that still hangs on the wall at the famous Woods Hole Marine Biological Laboratory…”Study nature, not books.”

What do you like to do for fun when you’re not working?

I love to go to the Gulf beaches, particularly Padre Island and Mexico beaches. Dr. Chaney got me inspired to travel Mexico beaches and other places, and I used to do that a lot until all the recent problems in Mexico. I still go to the Yucatan Peninsula regularly several times a year, and consider it the safest place in Mexico at present. I love all the old haciendas and history associated with them, as well as the cenotes (sink holes), and particularly the east coast state of Quintana Roo. The beaches, rocky shores, and coral reefs there, as well as coastal jungle, are some of my favorite travel places with my wife. I used to go there regularly with my graduate Coral Reef Ecology Class, but now I just go there to enjoy. At home and around Texas, I love visiting with my kids and grandkids, as well as collecting and enjoying old stuff from the mid-1800s, particularly Colt pistols, Texas and US Bowie knives, and scrimshaw.