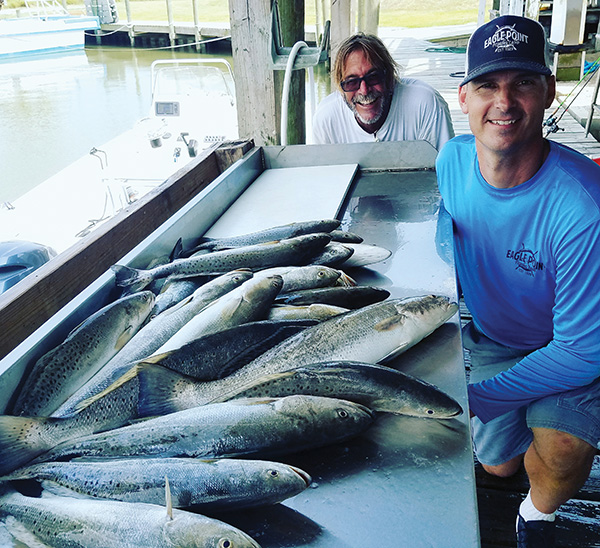 Eric Valentino and Capt. Dillman after a good day on the water.

All I can say is “Wow!” It’s hard to believe that summer is over. I know it is not the official end according to the calendar, but I go by the start of the school year. What can we expect for September and October this year? Hopefully no more hurricanes and a little cooler weather would be a welcome change.

Most people have their own predication if we are going to experience an early fall weather pattern. From what I am seeing and hearing, all indicators point to an early fall here in Texas. Hummingbirds have made an earlier than normal migration, I have also heard of sightings of teal along the coast. Sand trout, and plenty of them, were caught in Galveston Bay the first week of August. Normally all this happens towards the latter part of August, not the first week.

September and October are what I would consider transition months along the Upper Coast for fishing. As the water temperature drops, fish begin their migration north into the back bays of the Galveston Complex. I have already experienced the migration pattern with good action in Trinity Bay during August. In September and October we should see a bigger push of fish into the northern reaches of East, Trinity and Galveston Bays. Why? Bait, bait and more bait! Tides will begin to drop with each passing front. As the shrimp and shad get pushed out of the marsh, they become easy prey for predator fish.

So what’s the best bait?

While some fish will still be caught on live croaker, live shrimp will be the go-to natural bait. Lure fisherman will also do well, with soft plastics being the lure of choice. Eagle Point Fishing Camp will carry croaker and live shrimp during these months.

September and October is also the start of hunting season in Texas. Dove and teal season open in September for the bird hunters. Deer season is around the corner, so now is the time to prepare your lease and sight in those rifles! A special archery season for deer opens September 30.