A Little Trouble at Sea 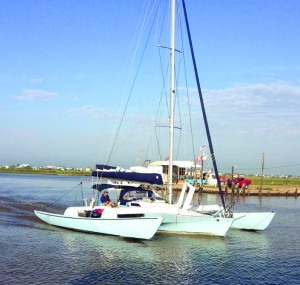 The smoke from the 3:15 p.m. starting gun in the 2014 Harvest Moon Regatta was still visible, drifting to leeward of the line as Ground Effect, Martin Hamilton’s Condor 40 trimaran crossed the line and  began reeling in the fleet.  The multihull class is traditionally the last class to start and this year was no exception.  Our start was one hour and fifteen minutes after the first of five consecutive monohull class starts, the first at 2 p.m.  There is no challenge in sending the fastest boats out first, since a big part of the race is managing the inherent risks of passing or being passed by other boats.  Being one of the dozen or so fastest boats in the regatta meant we would overtake more than 150 boats in the course of the race, and if all worked as planned, Ground Effect would be one of the first three or four boats to finish the 150 nautical mile race in Port Aransas early Friday morning.

Onboard were six very experienced sailors.  Four were veteran multihull sailors; the owner Martin Hamilton, Joe Peine, Roy Shaw, and Jeff Linn.  Terry Hudson and I both had extensive offshore experience on various monohulls, but limited experience on multihulls.

Tactically, our plan was to work to windward of the rhumb line, that line being the most direct course to the sea buoy in Port Aransas.  The winds were predicted to be relatively light at the start, then building to 18-20 knots true, around 1 a.m. Friday morning.  There was also a predicted shift from SE to S or possibly even SSW by early morning Friday.  Hence our desire to “put some in the bank,” meaning we would keep to windward of the rhumb line and if the wind did indeed shift, we would not then need to be close hauled, or possibly struggling to make our mark without tacking.

Based upon our assumed speed, we set up a furthest offshore waypoint on our chartplotters, which by coincidence, was directly offshore from the Matagorda Ship Channel, approximately 50 nautical miles from Port Aransas. We were hoping to reach it as the winds freshened and possibly shifted.  From that waypoint, we would crack off and have a comfortable and speedy reach straight to the sea buoy and then on to the finish line inside the Port Aransas channel. 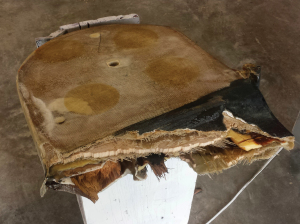 Right on schedule, we reached our tactical waypoint around 2:45 a.m.  The boat was really in a groove, handling the jumbled 4-6 ft seas with ease and making near 10 knots in building pressure.  We eased our sheets, cracking off and immediately picked up 2 knots of boat speed.  It was an amazing ride!  At around 3:30 a.m. there was a loud noise at the transom.  Suddenly, the boat lost all momentum and rounded up into the wind and seas, sails flogging.  Terry Hudson was at the helm and yelled that there was no response.  We were all dumbstruck.  Roy made his way back to the rudder cage and felt below the waterline.  “It’s gone! Sheared completely off!  Let’s get the sails down, we’re done.”

With the sails put away, we began slowly drifting northward at just over one knot.  The disappointment was palpable.  We were in no immediate danger, but clearly would need assistance. We tried hailing the HMR fleet and got no response. That was due, I can only assume, to our distance offshore and being in front of most of the fleet.  Finally, the US Coast Guard responded.  We gave them our position and the condition of boat and crew and asked them to try and reach BoatUS to arrange a tow to the nearest port.  Our communication with the Coast Guard was ongoing for nearly two hours before they decided it would be in everyone’s best interests to send a vessel out to tow us into Port O’Connor.  They had made contact with the BoatUS main office on the East Coast, but efforts to reach an associate on the Texas coast were unsuccessful.

Around 6:30 a.m. Friday morning, the Coast Guard vessel arrived and came close enough alongside so we could discuss towing procedures.  Once their main line was passed to our boat, it was made fast with a bridle and the last wild ride began.  Despite cleats ripped from the deck, bowsprits broken, and toe rails splintered, all from the tow line, we were delivered safely to the bulkhead in front of the US Coast Guard Station, in Port O’Connor by 9:30. Subdued but in good spirits, in the end, no one got hurt, and with time and money, the boat could be made whole again.  Despite his declaration minutes after the rudder failure that this was his last offshore race, Martin was already talking about next year’s race and what it would take to build a new improved rudder.  To paraphrase Lance Armstrong, it’s not about the boat.  Those of us who do this do it because we welcome the challenges, the possibility of facing unknown events or improbable outcomes, be it failures or triumphs.  To be sure, we all take risks in our everyday lives, but that world is ultimately predictable and pretty tame.  The ocean is our last, greatest and most beguiling wilderness.  We have no more control over its whims today than Columbus did in 1492.  And that’s exactly why we choose to go.