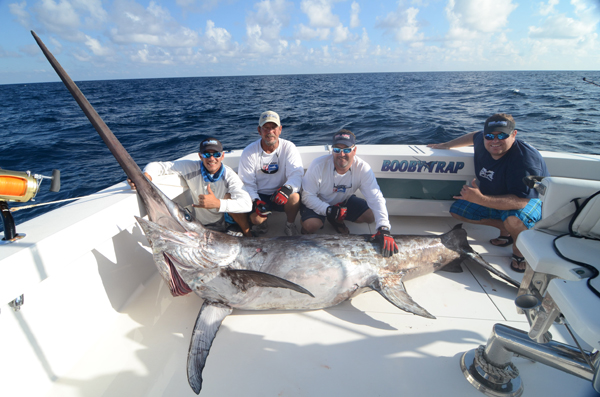 The moment is as fresh in his mind as if it happened last week. Four-year old Brett Holden stands on the dock holding a gleaming kingfish that’s nearly as big as he is. Published in a local newspaper, the photo, submitted by his dad, Don, documented the beginning of a record setting angling career.

While much has changed for Holden, now 45, one thing remains unchanged: his enthusiasm for sport fishing runs as deep as the blue waters where the billfish he chases roam.

“I’ve always been fascinated by big fish,” Holden says. “My dad had a boat, so I’ve been fishing since I was born. He (Don) primarily targeted snapper, grouper, kingfish and ling, but he also targeted sharks, so I grew up shark fishing with him. We caught numerous sharks that were 800 to 1,200 pounds. He still makes a couple of trips per year with us.”

Where the Big Fish Live

As owner and captain of the sport fishing juggernaut Booby Trap, a 52-foot, twin-engine 2008 Viking Express based at Surfside Marina that’s capable of hitting 40 knots,  Holden (aka “Captain Ahab”) and his crew of talented and intrepid anglers have emerged as the premier private sport fishing boat in the Gulf of Mexico. The team has been named the top private boat in the Houston Big Game Fishing Club for five straight years mainly on the strength of its ability to reel in an astounding number of elusive, majestic swordfish.  And while catching a swordfish is major accomplishment for any angler, bringing one of the bottom-dwelling monsters to the surface during the daytime, a feat the Booby Trap crew has perfected, is even more impressive.

In June, the Booby Trap crew, comprised of Jeff Wilson, Matt Reed and Travis Joyce, along with guest anglers Brian Barclay and Danny Lenderman, made sport fishing headlines when on its third trip of the season, Barclay hooked a mammoth swordfish that weighed in excess of 500 pounds, crushing the old Gulf of Mexico swordfish record of 341 pounds. The fish was placed in 1,000 pounds of ice and was weighed the next day. By that time, Holden says the fish weighed about 493 pounds, was 108 inches long and had a girth of 60 inches.

“This fish came to the surface and we could see it was hooked pretty deep. It then went back under for three hours. At first, I thought it was a 300 pounder, but the closer it got to the boat I said, ‘It’s a nickel!’ It probably would have been around 550 pounds, but we didn’t weigh it for 27 hours, and by then it had lost an inch in length and four inches in girth,” Holden said.

After snagging the massive swordfish, the Booby Trap tracked west in search of blue marlin and caught six wahoo and  two blue marlin before calling it a day.

Catching large numbers of huge fish is nothing new for Holden and the Booby Trap. In 2012, the Booby Trap caught 172 swordfish in 41 days of fishing and Holden says the crew has caught over 800 swordfish and 1,000 billfish in the Gulf of Mexico to date. Over its last 45 trips, the crew has caught 218 swordfish and released approximately 20 state record class swords. In 2009, the boat recorded the first “Super Grand Slam”—catching all four of the billfish species, which includes swordfish, blue marlin, white marlin and sailfish, in one day—in the Gulf of Mexico and repeated the feat in 2012. 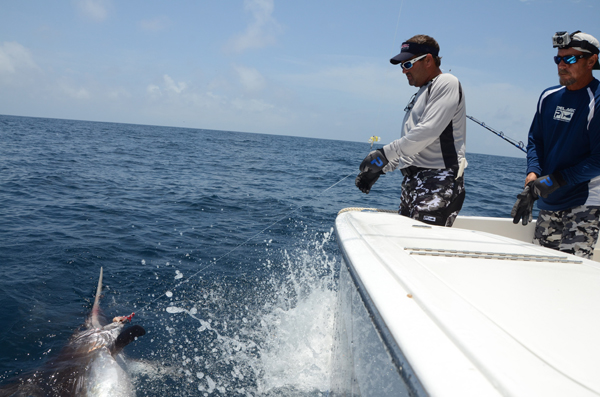 In late June, the prolific boat, owned by Holden since 2008, set a world record when the crew caught 30 swordfish in a single trip, breaking the old record of 21. Of the 30 fish caught, Holden says 23 were estimated to weigh in excess of 200 pounds and five were estimated to weigh at least 300 pounds. As is the custom for the Booby Trap, which releases 95 percent of the fish caught, 26 swordfish were released. The catch and release practice is in keeping with Holden’s overriding belief in preserving the natural resources of the ocean. He says fish badly damaged from the battle to bring them to the boat are usually kept.

“We try to release every fish we can,” Holden says. “We don’t keep fish because of size, we keep them because of the condition that they come to the boat in. Swordfish are good eating fish and we don’t feel bad about putting them in the boat. We just have respect for one of the most incredible fish in the ocean.”

For Holden, the owner of Holden Roofing and a Houston native who lives in Richmond, his rise to the top of the sport fishing game was not an overnight journey. In the 1980s, he began getting hired by boats to assist those crews in finding big fish before he bought his first boat and began entering tournaments.

While focusing on catching blue marlin by day, Holden dabbled in catching swordfish at night, as catching the elusive fish that lives in over 1,700 feet of water during the daytime was extremely rare. For over a century, swordfish were caught primarily at night when they ventured up to about 300 feet from the surface to feed. While fishing at night, Holden says a good trip might yield two to four swordfish.

“There was no daytime fishery (for swordfish) here (in the gulf). A group in Florida started catching them during the day, so I knew it could happen here.

“For years we were told that the gulf had been fished out and the swordfish were not there, but I didn’t believe that. We went out numerous times and never caught one, but on the first trip that we did catch swordfish, we caught five.” 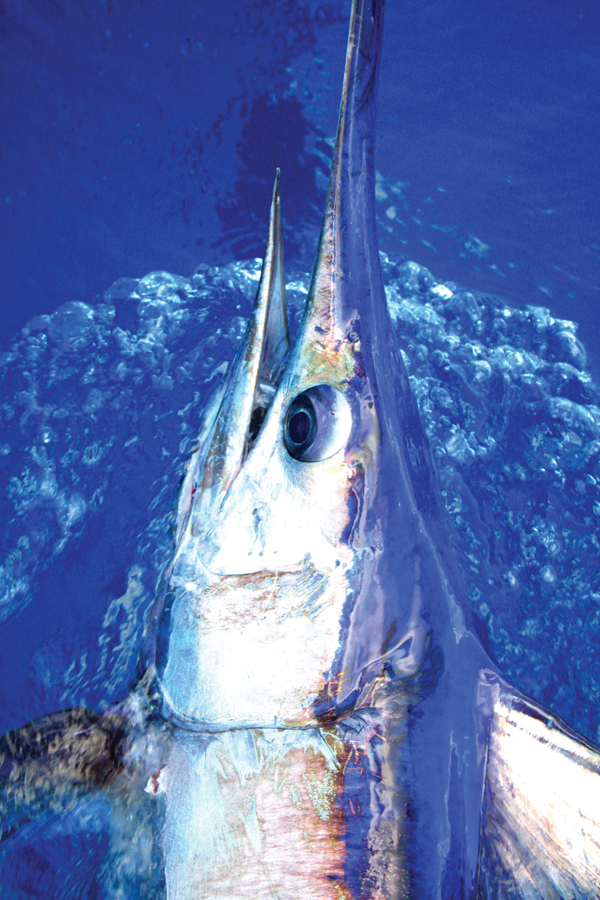 Using squid bait provided by sponsor Bait Masters, along with their recommended rod, the “Get Tight Sucka” series, 80 class reels and up to 6,000 feet of 80-pound, high visibility orange line with strobe lights affixed to the leader, and utilizing sophisticated radar and sonar equipment to see where the fish are living, the Booby Trap has re-written the rules for swordfishing in the gulf.

“The techniques we’re using are different from anybody I’ve ever seen and we’re able to produce double digit swordfish on just about every trip,” Holden says.

For the past three years, Holden and company have hosted the Texas Swordfish Seminar at Surfiside Marina, where they reveal their techniques to eager anglers. The seminar benefits the non-profit Everyday Heroes organization, which provides transportation to veterans to and from their doctor’s appointments. Holden says they expected 50 people the first year of the seminar and more than 500 showed up. Over 2,500 people attended the 2013 seminar held in March. To date, the event has raised over $500,000 for the charity.

Holden says he’s considering starting a fishing charter company in the future, but for the time being, he’s content to keep setting the bar for daytime swordfishing and billfishing in general in the gulf and doing his part to help Everyday Heroes.