Port of Houston: Impossible dream turned into a reality 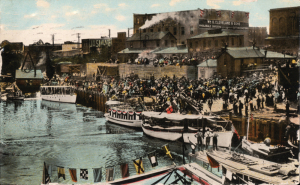 Houston Ship Channel at the foot of Main Street in 1914.

The Port of Houston will celebrate its 100th birthday Monday, Nov. 10 – an anniversary that seemed an impossible dream and almost laughable a century ago. Build a port 52 miles inland?

According to the Port’s history, in the 1890s Congressman Tom Ball – for whom the town of Tomball is named – worked hard to get support for a deep water port for Houston. In September 1900, a devastating hurricane nearly wiped Galveston off the map, killing some 8,000 people in one of the nation’s worst disasters in history.

Ball’s colleagues began to listen to his argument for a protected inland port. Then, with the discovery of oil at Spindletop and the growth of crops such as cotton and rice, it became clear that Houston’s ship channel needed the capacity to handle larger vessels. Through Tom Ball’s persistence, Houston and the federal government shared the cost of dredging the ship channel that would link Houston to the world. 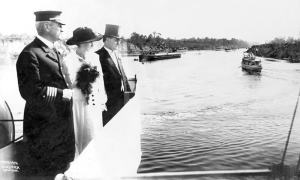 Port of Houston opening celebration in 1914.

Work began in 1912 and the Houston Ship Channel opened on a Tuesday morning, Nov. 10, 1914, with a 21-gun salute and thousands of people on hand to celebrate as President Woodrow Wilson fired a cannon via remote control to officially open the channel.

Today, the Port of Houston, a 25-mile-long complex of diversified public and private facilities along the ship channel, is home to the largest petrochemical complex in the nation.

It has giant container terminals at Barbours Cut, Texas’ first cargo container terminal which opened in 1977 at Morgan’s Point, and its $1.4 billion Bayport complex, which opened Feb. 7, 2007 just north of Seabrook. A computerized inventory control system tracks the status and location of individual containers at each terminal.

With the widening of the Panama Canal, which is also celebrating its 100th anniversary, the Port Authority is preparing for the larger generation of vessels (9,000-plus TEU in capacity) that soon will need to call at Bayport and Barbours Cut with an $80 million dredging project to deepen the channels from 40 feet to 45 feet to match the depth of the Houston Ship Channel.

“This has been a tremendous effort by all parties involved to make sure we are ready to handle the larger ships needing to call our facilities,” Port Executive Director Roger Guenther said, adding that dredging already is under way at Barbours Cut, and when completed later this year, work will begin at Bayport.

Quite a change from those days long ago when the Port was located near the confluence of Buffalo Bayou and White Oak Bayou at Allen’s Landing, now a park known as the birthplace of Houston.