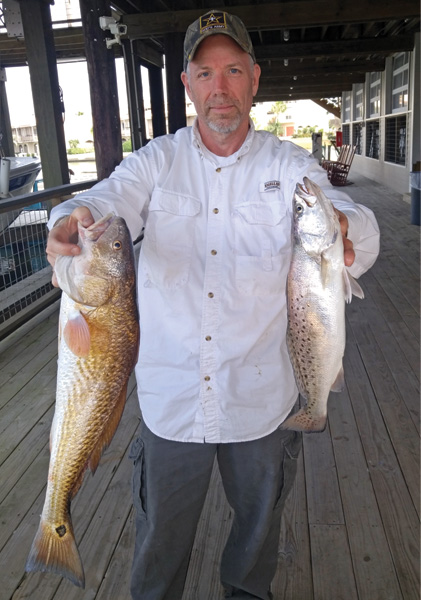 Doug Cadwell with a Texas two-fer of redfish and speckled trout.

It has been said that the older you get, the faster time goes by. It seems like only yesterday I was penning my first article for 2016 and now I am writing the last one for the year. But 2016, for sure, is a year to remember.

Winter started off typically here on Galveston Bay. In between fronts, the fishing held consistent. The upper reaches of the bay, Scott, Burnett, Crystal and West Galveston Bay lived up to their reputation as winter hot spots. In March, and the first two weeks of April, fishing really turned on in the Texas City/ Eagle Point area for speckled trout. Great catches were coming from both locations. This sure did set the stage for Galveston Bay to have an epic year of fishing.

In mid-April of this year, an upper level low stalled over the Rocky Mountains. During the overnight hours of April 16-17 and into the morning of the 18, Houston received over 17 inches of rain, the most since Tropical Storm Allison in 2001. The resulting runoff from this event flooded Trinity and Galveston Bay. This fresh water pushed the fish into lower Galveston and East Bay.

East Galveston Bay remained the best location until about the last week of May. The fish began to move back up north, following the flow of saltwater back into our bay system. Everything seemed to be getting back to normal until June 3, when the Houston area received even more rain! Another runoff event ensued, turning our bay fresh and off-colored. This time though, while some fish retreated back to East Galveston Bay and further south, lots of fish stayed in the area. They sought deeper water along the spoils and gas wells.

As we moved into June and August, the area along the ship channel spoils and gas wells, known as the A-lease wells, saw very good numbers of speckled trout and redfish. Limited supply of live bait was a problem for area fishermen during the first few weeks of summer, another adverse effect from the June flood. But by the third week of July, Galveston Bay and the fishery was back to normal. Towards the end of August, we started seeing fish make a move back into Trinity Bay and farther up the channel, a normal movement that happens every year.

September is a month of transition where schools of speckled trout are harder to locate. This certainly was the case this year. Scattered catches of redfish and speckled trout were the norm. By the end of September and the first week of October, as I type this article, fishing for trout has seen an upswing. But the problem we are experiencing is the size of the trout. Numerous undersized fish are being caught, compared to keepers. I believe this is due to the higher than normal water temperature and tide.

I am optimistic that November and December fishing will get us back on track for numbers and size of trout. We are finally experiencing some cooler weather with the passing of a couple fronts. Although a true cold front has not passed, water temperatures have cooled a little. The first cold front should help drop the tides and flush the bait out of the marsh and inlets of our bay system. This should help fishing tremendously.

Eagle Point Fishing Camp will maintain a good supply of live bait through the year. Remember to be courteous to others on the water. Happy Thanksgiving, Christmas and Holidays to all!