TIE ONE ON: Capt. Wayne Davis

WE ASK captains, guides and those in the industry what they’re throwing, for what species and what they’re drinking after a long day of fishing.

The Willow Tail comes in a variety of fish catching colors.

First, I use soft plastics (KWigglers) 95% of the time, the other five percent you can catch me throwing topwaters.  Over the last couple years, I have found myself throwing the Willow Tail Shad (WTS) most of the time.  This is a very effective shallow water bait and I always rig it on our 2/0, 1/8 oz. short shank black nickel hook.

All of my charters are done wading with artificial lures. I am never fishing over 3 feet, and most of the time it is less than thigh deep. With the WTS and small jighead I can effectively, and with control, work the lure in just about any condition (grass, potholes, ledges etc..)

Every short twitch with the rod tip makes that WTS tail flip flop around – I believe the lackadaisical attitude of the bait entices a strike from just about any fish.  The WTS is a lazy bait, not designed for a simple cast and retrieve method.  The angler should work the bait.  The mere profile of the WTS is in and of itself luring to big fish.

Over the last two years I have been targeting and have been able to somewhat pattern South Texas Snook.  To date, I have landed 52 during my trips.  Almost all of them have been over 28 inches, with the largest one taping out at 35 inches and 13 pounds. All have come on the Willow Tail.  I also caught the STAR winning trout while snook fishing – a 31+ incher at 9.5 pounds.  Since I am a licensed captain I do not qualify for CCA STAR so the fish was released (it would have been anyway).

As far as a dock cocktail after a day of fishing – well of course the “Wiggler.” White rum, cranberry and a splash of grapefruit juice. I took it to our local restaurant in Port Mansfield, The Pelican, and they loved it so much they put it on their menu and it is the number one selling cocktail.

Max Conner with a TANK of a snook.

Where did you grow up and how did fishing become a big part of your life?

I have grown up with my grandfather; just two of us. As long as I can remember, we’d commute from Houston to Galveston EVERY weekend to go fishing.  Often, we’d fish all night on 61st Street or Jimmy’s Pier on the Seawall and travel home again on Sunday night.

In 2012, my grandfather changed careers and accepted a job on the island so we could move here and I could pursue my passion for fishing!  Our first Christmas after relocating, he bought me a kayak. I waded, yakked, and surf fished year round. Saltwater is truly in my soul.

Do you have an all-time favorite catch or fishing moment?

I will always remember my first tarpon. I was 14 and had been fishing Bob Hall Pier in Corpus all weekend.  We went all night without a bite so I was set to fish the morning. I had a group of kids tell me that they saw a couple of fish roll in the morning, so I was determined. I was on the pier by 6 a.m. and hooked my

first fish by 6:15 a.m. but it jumped the hook. Shortly after, I threw at another one and hooked it good. I fought the fish for 10 minutes or so before netting it. It measured around 42 inches.

What’s your favorite species to catch?

Setting the hook on big trout will always be the best feeling. However, this past summer we fished for snook in Southern Florida for about a week and that definitely sealed the deal. We caught a dozen fish in the 35” to 43” range.

Without a doubt my favorite place I’ve ever fished was Sanibel Island, Florida. The snook bite was incredible and we got to fly fish for tarpon in the mangroves, which has always been on my bucket list.

If you had to have only one lure, what would it be?

I’d say Down South Lures with no hesitation. It’s the most universal bait on the market. You can throw them in any kind of water and in any weather condition.

Tell us about your sponsors.

At age 14, soon after our move to the island, I met Hunter Welch of Fishstix.  We just hit it off and he began to build my rods.  Louis Thomas, of Black Marlin Rods, has built my shark rods.  Jason Paul with Stinky Pants fishing began to support me early on too.  Michael Bosse with Down South Lures has been a tremendous friend and sponsor too.

What are you studying in school and what are your plans after graduation?

I will be a Freshman at Texas A&M Galveston beginning in July. My degree is Maritime Administration. I’d like to either have my own business or work on the rigs when I graduate college.

Aside from fishing, what else are you passionate about?

Bird hunting is my second passion. Last year we added a beautiful black lab puppy to our family.  She’s now 11 months old, 70 pounds and loves to be on the water and bird hunt.

What else should we know about you?

I am thankful for my grandfather and the opportunities that he has provided for me.  He has sacrificed much for me to live near the water and chase my dreams.  I’ve been blessed and would like to always pay it forward.

Fishing After a Cold Winter 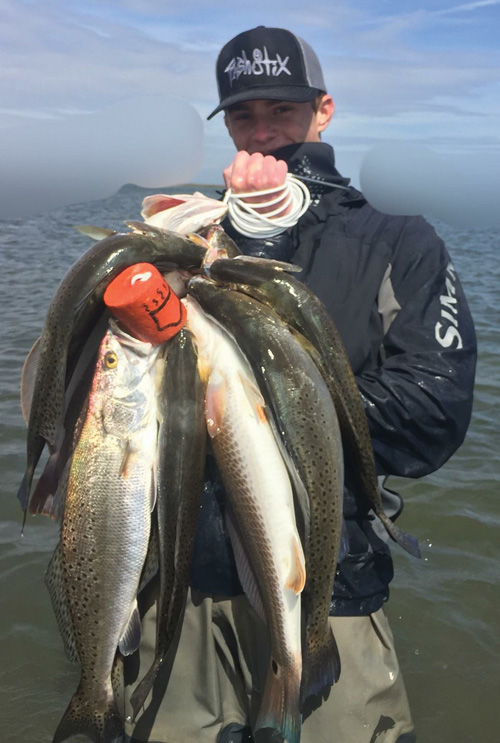 Max Conner with a solid stringer of trout and reds.

What will the effects of our icy winter have on fishing?

Beginning in mid-December, the Galveston Bay Complex experienced one of its coldest winters in years.  Many of the anglers have not been through a severe winter from an historical perspective. You have to go back into the 1990s to find when we had subfreezing temperatures along the Texas Coast that lasted more than a short time.

Severe cold is not anything new to the Galveston Bay Complex; however, the number of days of subfreezing conditions has progressively dropped over the last decade.

A frequently asked question by readers of the Galveston County Daily News is how will all of the bitter cold weather affect fishing during 2018?

The answer is that it is hard to pinpoint; however, there are several indicators that tell us that when the weather warms, normal fishing patterns should return.

In the good news department, it appears that there were no major fish kills during the multiple freeze events that took place.  While fish kills were reported, most of the finfish were forage fish, mainly mullet, menhaden and small fish of all species that were not large enough to tolerate water in the 40 degree range very long.

One of the reasons the stocks of gamefish survived well is that they had time to get acclimated to the cold and had moved into areas offering deep, protected waters.

Last January, the Texas Parks and Wildlife Department exercised its right to close certain bodies of water when freeze events took place.  This is the first time the TPWD has exercised that option and the areas around the Galveston Bay Complex that were affected were Moses Lake in the vicinity of the flood gates and most of Offatts Bayou.

Both areas are known to hold large concentrations of trout and other fish when the water temperatures fall into the low 40s or lower.  In those pockets of deep water, fish are sluggish and easy prey for anglers.

Shortly after one of the freeze events in the early 1960s,  I fished with a friend at the Blue Hole in Offatts Bayou and recall catching close to 50 trout (there were no size nor bag limits back then) with many of the fish being snagged by the treble hooks on my Bingo Lure.

In the bad news department, the freeze took its toll on aquatic vegetation.  There is little doubt that the plants will rebound; however, it could take a while after this long winter.  Like with all other vegetation, warm weather is the key to rebounding and growth.

The effect of the loss of aquatic plants is in the loss of cover for fish, mainly young fin fish, crustaceans and shell fish.

Over the past 10 to 20 years when mild winters were the norm, we started the spring season with a good crop of bait in the marshes and wetlands.  It remains to be seen just how badly the freezes affected that part of the marine life cycle.

Overall, I expect 2018 to be a good year for fishing, barring any catastrophic events such as major floods or droughts.

While not on the topic of fishing directly, one of the big effects of a long cold winter is on boats, especially engines and mechanical equipment.  A large number of boats have not been run for many weeks and problems likely are going to be widespread, with contaminated fuel, frozen water lines and other parts that are vulnerable to freezing weather or sitting up very long.

Before using your boat for the first time this year, check it out. For the first trip away from the dock, make it an abbreviated one and do not venture too far.