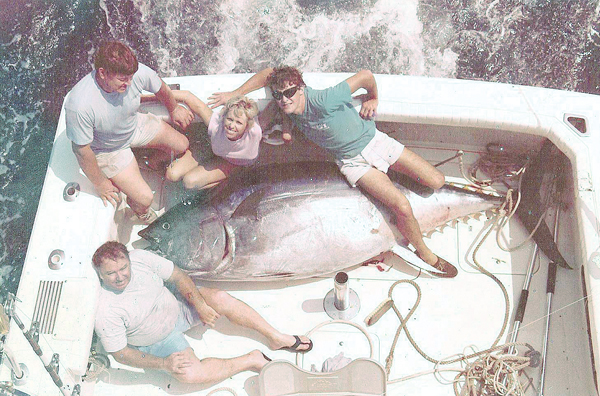 It was May 1985, the weather was warming up and everyone was ready to go offshore fishing. The conditions weren’t ideal but a small window of good weather presented itself. A group of fishing buddies, Neal Isaacs, his wife Trina, David Tubbs, Joe Johnson and Steve Thompson, headed out to the canyon off South Padre Island. They had always had great luck this time of year – the marlin seemed bigger, and there was always the off chance of a bluefin tuna. They had no clue this was about to become a record-breaking day.

The fishing crew left at daybreak and started trolling once they were 60 miles out. One yellowfin and a couple of wahoo were caught early on – not exactly what they were looking for. They made the move further offshore into deeper water.

Around 1:00 p.m., a school of small tuna was spotted splashing less than a mile away. The crew trolled towards the commotion and the pink Mold Craft Wide Range on the starboard rigger went down HARD.  It was obvious this was a big fish. Trina jumped in the chair and Joe backed down on the tuna as it tore line off the reel. It managed to strip over 500 yards of line before they stopped her.

The huge tuna was brought up to the boat several times, only to dive back down on big runs. Finally, after an hour-long battle, they had their shot. Neal grabbed the leader, and they stuck her with a flyer. The gaff didn’t penetrate, but the rest of the crew was standing by! A calcutta cane gaff to the tail, followed by a knife-point flyer, did the trick. They slid on a tail rope and worked to get the beast in the boat.

Without a transom door, they struggled to get the football-shaped fish over the gunnels. Luckily, a nearby boat came to their aid and lent a come-along. Another hour later, the fish was finally on the deck. They headed back towards the Sea Ranch Marina, feeling on top of the world. Once on the scales, the bluefin weighed in at 808 pounds.  It was 8.5-feet-long, with an 88-inch girth and was easily a new Texas State record. It was a heck of a day of fishing in anyone’s book!

Story recounted by Capt. Brett Holden, friend of the family.