Anglers fishing the Galveston Bay Complex often take for granted the positive effects of oyster reefs, both live and dead, on their fishing.  That is until the reefs start diminishing and the fishing is affected.

Let’s take a look at what we are discussing and how oyster reefs benefit fishing.

Oyster reefs in Galveston Bay form in the open bay along the periphery of marshes and near passes and cuts and can be either subtidal or intertidal. The reef itself is three dimensional because oyster larvae settle on the top of old shells growing upwards through the water column above the established oysters. The shells create an irregular surface that support a myriad of small marine life.

The oyster reef community is very diverse with a wide variety of shell fish, crustaceans and fin fish forming a balanced aquarium. Predators in this habitat include fish capable of crushing mollusks such as black drum, red fish, sheepshead, and blue crabs and stone crabs, which prey on small oysters with thin shells. At low tide, birds forage on the exposed oyster reef habitat.

When Houston was first settled, an ancient oyster reef (Redfish Bar) separated Upper and Lower Galveston Bay. This reef stretched from Smith Point on the east to Eagle Point on the west and had only one small gap through which shallow draft boats could pass. There were extensive oyster reefs throughout Trinity, East and West Bays as well.

Just about every species of fish caught in Galveston Bay can be found on or around oyster reefs. 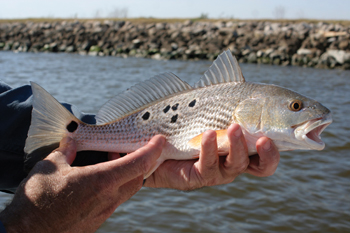 Hurricane Ike had a tremendous impact on oyster reef habitat in Galveston Bay. The Texas Parks and Wildlife Department estimates that approximately 60 percent of the oyster reef habitat in Galveston Bay was covered by sediments as the storm surge moved through the bay in September 2008. Scientists do not know how long it will take for the reefs to recover.

With this background on the makeup of oyster reefs and how they are formed, let’s visit about fishing the reefs.

In my childhood years when first learning to fish Galveston Bay, oyster reefs were the prime target.  We did not have electronic equipment to locate the reefs, just a long pole that we bounced off of the bottom. If the pole had a soft landing we kept moving until the pole struck something solid and we had found oyster shells.

Just about every species of fish caught in Galveston Bay can be found on or around oyster reefs.  Fish with scales and tough mouths, such as sheepshead and both black and red drum, feed along the shell while consuming crabs and other crustaceans.

Trout like to feed just off of the reef during tidal movement which flushes the small marine life from their shelters.

Seasoned shell reef anglers know how to fish the reefs and plan their strategy based on tidal movement.  During slack or weak tides, they will focus on the reef itself as drum sheepshead and reds and other tough skinned, strong mouthed fish will be working the bottom.  When the tide starts moving, then trout on the periphery will be the target.

Trout will be found on the reef  itself; however, they tend to be cautious as the edges of the shell can be razor sharp.

Anglers have been reporting reduced catches in Galveston Bay over the past few years and one of the culprits likely is the reduction in acres of oyster reefs.  Hopefully our restoration program will prove successful and the sooner the better.