Tie One On: Capt. Brian Barrera

We ask captains, guides and those in the industry what they’re throwing, for what species and what they’re drinking after a long day of fishing.

I’m doing a lot of snook and juvenile tarpon fishing right now. With that being said, the trusty Shimano is always rigged up with a D.O.A. Lures Bait Buster, in a variety of colors worked “low and slow,” or I’m burning a D.O.A. 3” shad tail in anything with chartreuse on a 1/2 to 1 oz. jighead through the thermocline where the fish like to hang this time of year.

Once back at the dock after a long day in the elements, I like to have a Kimo Sabe Mezcal Reposado on the rocks or an old fashion. And bartender… keep ‘em coming! 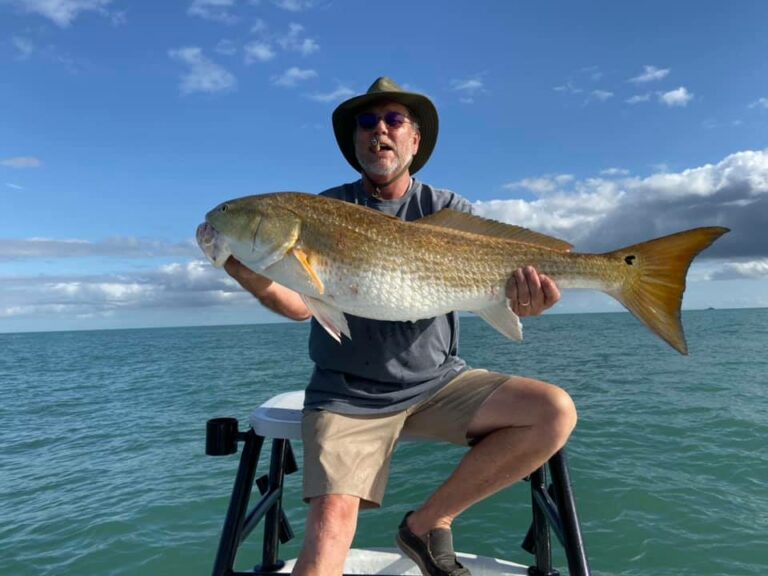 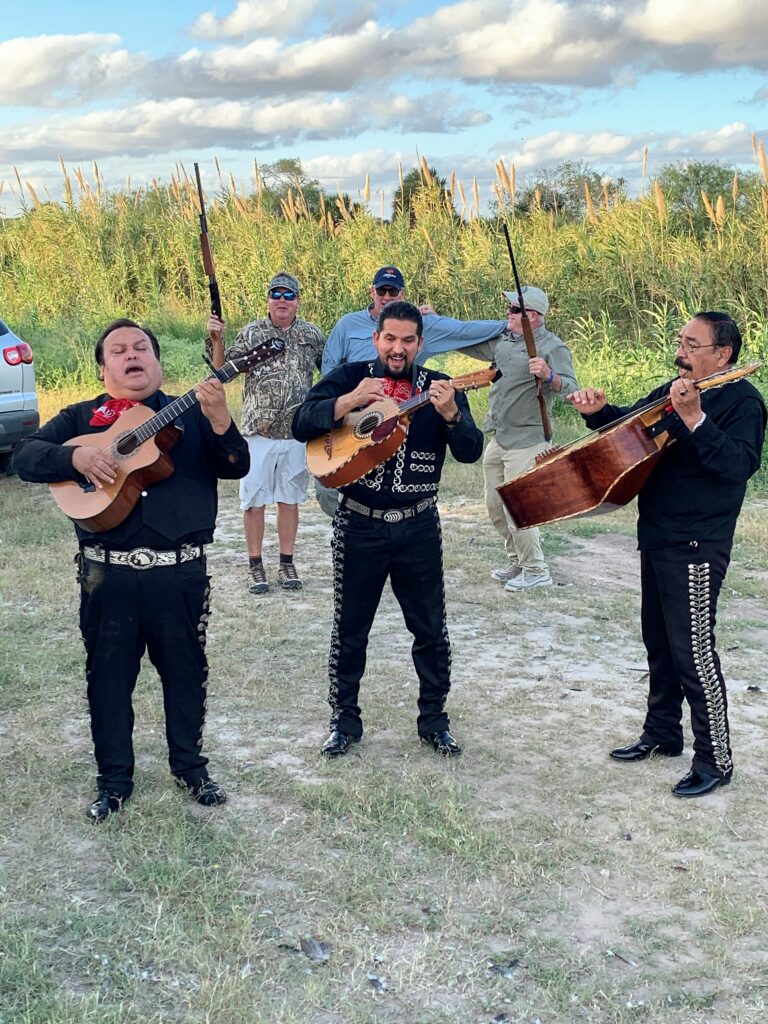 I spent the whole month of October in South Padre Island, Texas hosting 3 groups from the Carolinas to fish Laguna Madre waters. This area is beautiful, full of skinny flats with loads of grass that requires new techniques to tackle the huge prey that can hide in it. I solicited the help of several of our D.O.A. Lures guides to show these anglers are and techniques sticking trout, reds, flounder and tarpon. Weather as the cold fronts drop can and did hamper us a few days but that is the Lords will. You must adjust as our great guides did. My relaxation while anglers hit it with the guides. Oh – also had a private pool too. Great place to lounge and chill after day of fishing. I play chef – not but damn good cook! Breakfast lunch and supper every day. Suppers such as grilled pork roast, jambalaya, fish (plenty) and dove breast on grill. My big event is supper of local fare. I hired a local chef that cooks EVERYTHING from scratch – no cans. Real Mexican food at its best and believe me… she has great pleasure in cooking for us and you wont go away hungry. Hope leftovers are okay with ya! 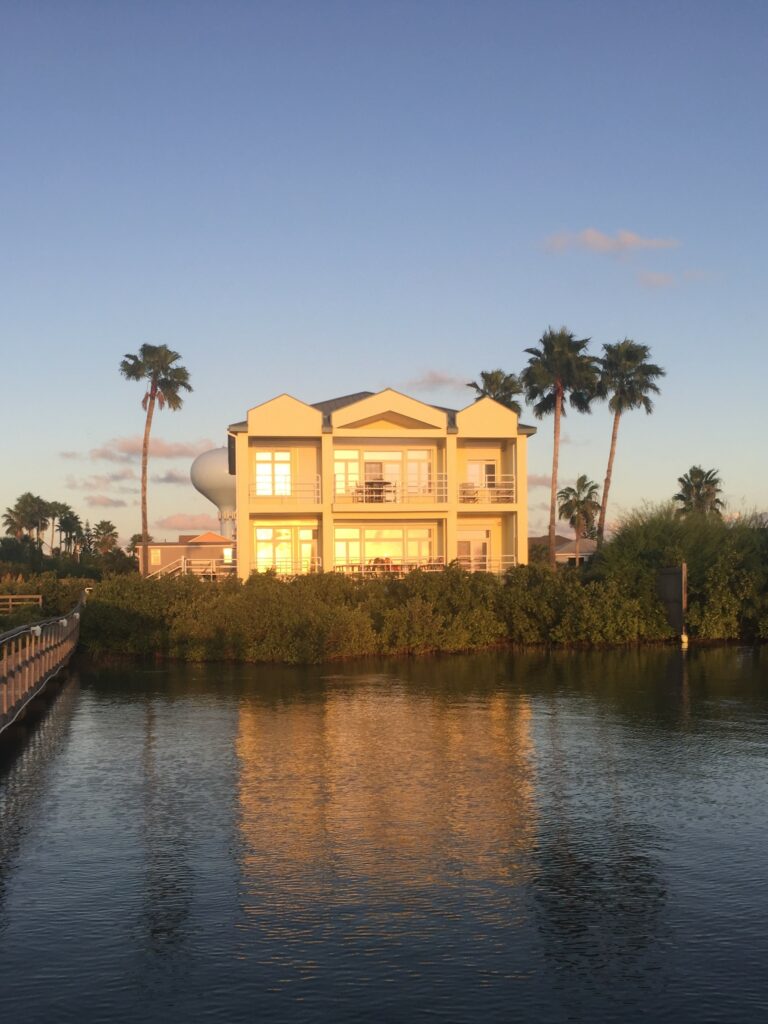 The accommodations for the trip.

The jetties (a short run to the Rio Grande and the border) are full of mullet as the run is on. Tarpon, snook and loads of big reds hang in them. Weather dictates fish ability but awesome if can do. Inshore fishing in skinny waters hold trout and reds with a huge opportunity for BIG fish. 30″+ trout and huge schools of reds that we had up to 30”. If weather is right sight casting is a blast. Imagine casting at a huge school of over slot reds. Hook up in skinny water and hang on. No where to go but out or IN. watch the boat, say goodbye. Deeper water holds plenty and huge snook providing top water at its best. One a.m. trip hooked approximately 40 really nice snook.

I also arranged for 1 group to go dove hunting – off the shelf – limit out on big white wings full of sunflower seeds. They wanted a marichi band in the field after shoot with appetizers and beverages. Can and did do.

To top it off, they also wanted massages. Well, I can arrange it. I had a licensed massage therapist come rearrange their bones and muscles from the hard shooting and fishing.

South Padre Island is a great place to hold a team building or group trip – comradery at its best. Don’t come here just for this, beautiful area to sight see and relax on the Gulf beaches and such. 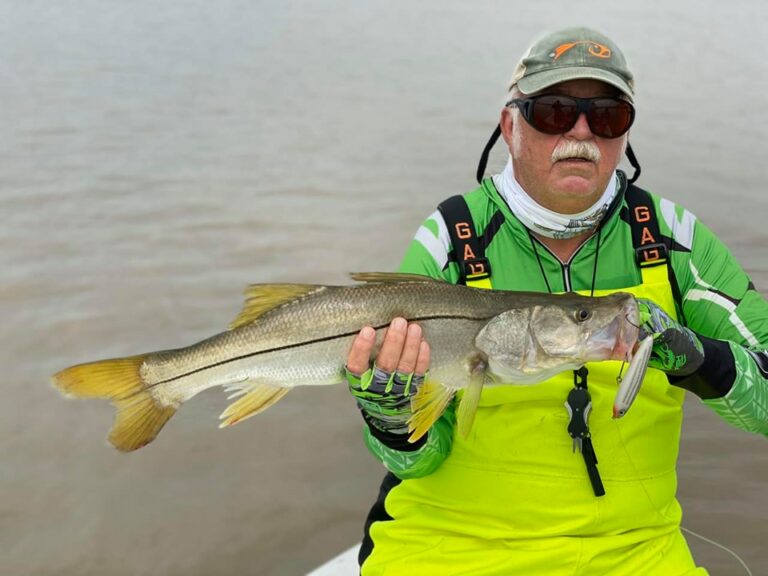 A beautiful snook that was landed while fishing with Capt. Brian Barrera. 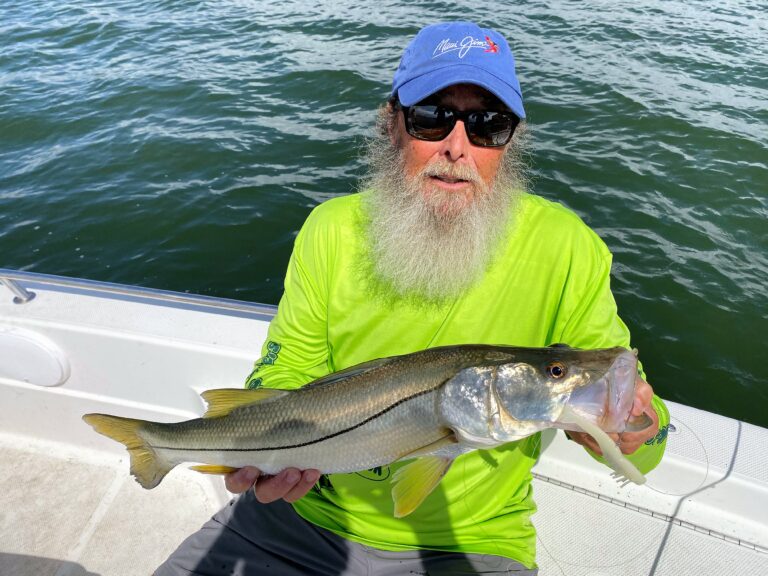 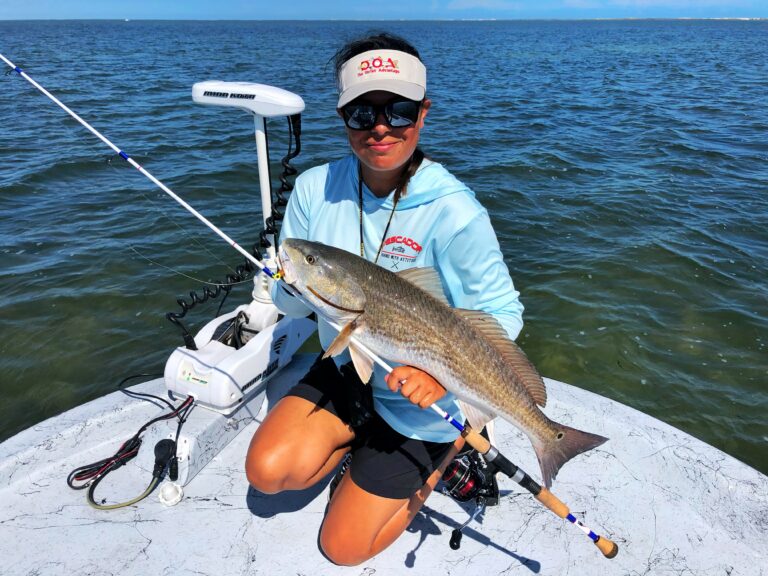 “No, don’t hold too tight to the reel. Cause it’s a big one boy. It’s gonna pull you down now.”

That happens to be one of my favorite lines on the song Pull by Blind Melon.  It’s also exactly what was racing through my mind as a 100 lb tarpon made its first appearance on an epic jump while fishing with Capt. Brian Barrera on South Padre Island.  In an instant, with a perfectly embedded hook in its upper lip, the Silver King made its first run 125 yards parallel to the jetty towards the Gulf before another spectacular aerial show.

In the last issue, I concluded my article by mentioning the 2019 Shallow Sport Tournament on SPI.  This year, I had the pleasure of guiding Team Sportsman, consisting of Rob Youker, his 11 year old grandson McCaden Wolf, JR Torres and his daughter Crystal Torres Brice, all from College Station.  Rob is President of The Sportsman Boats in San Benito.  The Sportsman is the only authorized Shallow Sport dealer in the Rio Grande Valley and both companies have been honored as leaders in the boating industry.  Rob has led this 3rd generation company to a Top 100 Marine Dealership Award in North America for 14 consecutive years.

I met the team early in the morning at Jim’s Pier on SPI and we immediately began discussing the day’s strategy.  A few sips of coffee later and a couple of ideas traded back and forth and we were on our way to join the ant line of boats en route to check-in behind Louie’s Backyard.  We wanted to make sure we had good positioning before the 6:30 am shotgun start.  If you’ve never been in the midst of 250+ boats simultaneously racing off to their favorite fishing holes, then add it to your bucket list of things to do on the Texas coast.

Wind was a major factor this year as anglers dealt with stiff breezes in excess of 30 mph.  As I said in the previous article, I like me a little bit of gusting wind.  Team Sportsman member JR Torres also seemed to favor the breeze as he hauled in a 27 15/16” tournament winning redfish that topped the scales at 8.22 lbs and earned Team Sportsman a 1st Place finish in the Redfish Division.  This was JR’s first fishing tournament and we faced some heavy hitters as competition.  How cool is that?

Fishing on South Padre has been nothing short of exceptional as summer has officially kicked off.  Redfish action has been solid during the afternoon outgoing tide using a DOA 5.5” Jerk Bait in Texas Croaker on a 1/8 oz. jighead.  When redfish aren’t as eager to eat a lure, drift fishing the flats with cut ballyhoo has been productive.  In the cooler and deeper waters off the ICW, speckled trout can be found on both live and artificial baits.  Target visible structure while slowly crawling a lure on the bottom until you feel that thump. Black drum have been schooling up in the channels of South Bay and can make for an action packed day of fishing.  These herds of fish have been prevalent on both an incoming and outgoing tide.  At the jetties, kingfish are also beginning to show up and as I mentioned earlier, so are the tarpon.  If you’d like an opportunity at landing a Silver King on the Texas coast, give Capt. Brian Barrera a call!  Until next time, keep fishin.’